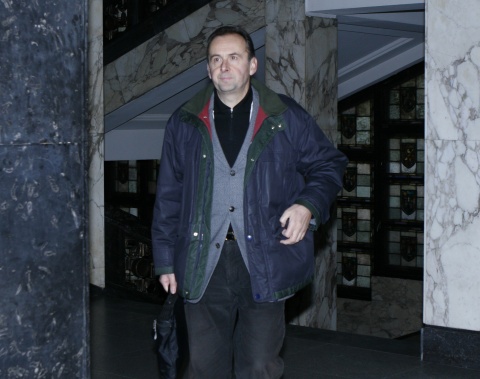 The money laundering trial against Valentin Dimitrov, the notorious former CEO of heating utility Toplofikatsiya-Sofia, has been postponed for January 30, 2013. Photo by BGNES

The money laundering trial against Valentin Dimitrov, aka Valyo Toploto, former director of heating utility Toplofikatsiya Sofia, which is underway at the Sofia City Court, has yet again been postponed for January 30, 2013.

The hearing scheduled for Tuesday did not take place because one of the jury was had been admitted to hospital for surgery, according to reports of Darik radio.

Due to the principle of unchangeability of composition of court, the trial was postponed for January 30, 2013.

Former Energy Minister Rumen Ovcharov, who appeared as a witness in court, could not testify yet again and is to be questioned at the next hearing.

In June 2012, Dimitrov called for a plea bargain but the prosecutor in charge of the indictment was on leave.

In October, it turned out that Dimitrov and the Prosecutor's Office had not reached agreement on the parameters of the plea bargain.

The SAC ruling revoked the verdict of the Sofia City Court, which had sentenced the former CEO of the heating utility to 14 years of imprisonment in June 2009.

The court of second instance cleared Dimitrov of embezzlement charges to the tune of almost BGN 6 M.

The SAC judge panel also revoked the confiscation of all of Dimitrov's entire property and restored his right to hold managerial posts.

Rogachev and Antonov were acquitted by the Sofia City Court, while the two women were cleared of charges of abetting embezzlement by the SAC.

Ablanska's sentence of twelve years of imprisonment plus the confiscation of half of her property was revoked and her right to occupy managerial posts was restored.

Stoilova, whose sentence of 10 years of imprisonment issued by the Sofia City Court was also revoked, will also be eligible for managerial appointments.

The proceedings at the SAC lasted over two years.

In end-2010, the Sofia City Court sentenced Dimitrov to three years of imprisonment for malfeasance in office.

The prosecuting authority demanded a penalty of ten years of imprisonment for the reckless spending of over BGN 2 M on promotional leaflets and business entertainment expenses in the period 2003 – 2006.

He also faced charges of signing a contract with a private company tasked with collecting the heating utility's receivables, but he was eventually declared not guilty.

In end-2011, the Sofia City Court revoked a sentence of five years of imprisonment handed to Dimtrov by the Sofia Regional Court in 2008 for violations of the Currency Act.

In 2008, the Sofia Regional Court declared Dimitrov guilty of failing to declare deals worth over BGN 10 M before the Bulgarian National Bank (BNB) as a manager of the Pro Mark EOOD company.

The Sofia Regional Court acquitted Dimitrov on all other counts pressed by the prosecution involving breaches of the Currency Act.

On December 22, 2011, the SCC revoked the decision of the first-instance court in its entirety and returned the case to the Sofia Regional Prosecutor's Office.

The judge panel noted that the indictment against Dimitrov had flaws that had to be removed but it also found irregularities in the work of the court of first instance.