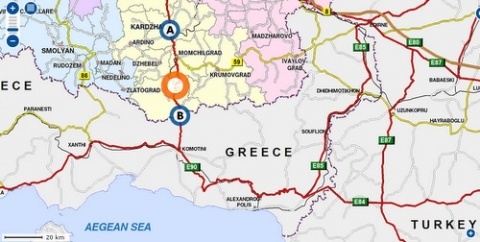 The road between Kardzhali (A) and Podkova (marked in orange) completed the Kardzhali-Makaza Pass (B) road, the Danube-Aegean through Bulgarian territory. The road on the Greek side is still to be completed. Map from bgmaps

The launch of the Makaza border pass has been once again delayed for the unforeseen future, according to the Bulgarian Member of the Parliament, Dimcho Mihalevski.

Speaking Sunday for journalists in the southern Bulgarian city of Kardzhali, Mihalevski, MP from the opposition Coalition for Bulgaria, led by the Bulgarian Socialist Party, BSP, gave several reasons for the delay, despite Greece needing only 10 days of work to open the pass.

Among them, according to the MP, is the 3-week strike of Greek workers, protesting the fact they have not received salaries since 2011. The other reason stated was a tragic construction incident, resulting in the deaths of two workers.

Mihalevski further said Greece was expecting the next tranche of EUR 30 B from the bailout package, which, if and when materializing, will allow the payment of the overdue wages and the completion of the road.

He, however, voiced strong doubt this will happen before Christmas.

The Bulgarian government, too, stated on several occasions already that the vastly delayed opening of the crossing point at the Makaza mountain pass on the Bulgarian-Greek border was the fault of Greece.

Also in September, Bulgarian Prime Minister Boyko Borisov even offered Greece to fund the 1.5 km road section with Bulgarian state budget money – a statement that was regarded as insulting by Greek officials, according to the Greek media.

The delay in the opening of the Makaza Pass, which is some 20 km north of Greece's Aegean coastline, has been consistently attributed to the slow construction of the road on the Greek side of the border. If it becomes fully operational, the Ruse-Makaza Pass road will provide the shortest route from Romania's capital Bucharest (and much of Central and Eastern Europe, for that matter) to the Aegean / Mediterranean.

Last year a long-anticipated decision of the Bulgarian government to make the Ruse-Makaza road a "priority project" was justified with the need to absorb EU funds under Operational Program "Transport", which would allow faster administrative procedures for investments, land expropriation, and construction. The Bulgarian government plans to turn the road in question into a "high-speed way" (with four lanes).