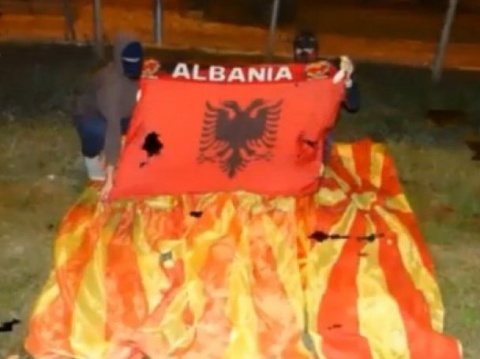 The Macedonian flag has been allegedly burned by ethnic Albanians in Skopje, ahead of the 100th anniversary of Albania's independence. Photo by EPA/BGNES

Two clashes between ethnic Albanians and Macedonians have occurred in the last 48 hours in the capital Skopje in the eve of the Centenary of Albania's independence.

The Bulgarian news agency BGNES reports that a large group of young people has taken down the Macedonian flag in the Skopje district Chair, populated by ethnic Albanians, and burned it Saturday afternoon. The police are probing the incident.

A few hours later, a group of around 30 people attacked and beat up several children.

The police have declined to comment on the ethnicity of the perpetrators and the victims, but local media have reported that the attacked children were Macedonian while the attackers were ethnic Albanians.

The 100th anniversary of Albania's independence and Albanian Flag Day will be marked on Monday.

Two days ago, during an official visit to Albania's capital Tirana, the automobile of Macedonian Prime Minister Nikola Gruevski's was littered with eggs and plastic cups and a young man can be seen on You Tube, torching the Macedonian flag.

The Macedonian Foreign Ministry has condemned the above incidents and demanded from Albanian authorities to find and punish the perpetrators.

The majority of Macedonians reportedly see the celebrations as provocation against the Macedonian State.