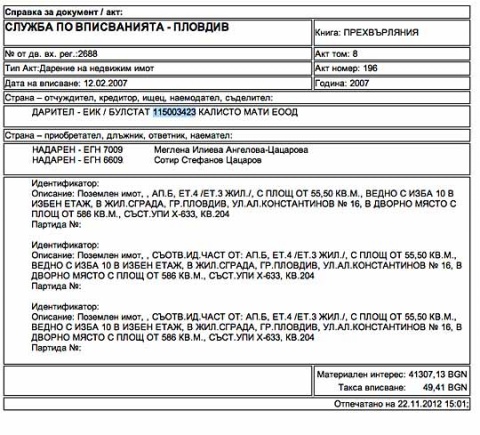 A copy of the document from the Registry Agency showing that Judge Tsatsarov and his wife have received an apartment in the form of donation. Photo by Bivol

In 2007, the construction company Kalisto Mati has donated an apartment to Sotir Tsatsarov, Chairman of the Plovdiv Regional Court and candidate for Bulgarian Chief Prosecutor, and to his wife, Meglena Tsatsarova.

The 56-square-meter apartment is located in a newly-constructed building in downtown Plovdiv, the site for investigative journalism Bivol.bg writes, citing documents found with the Plovdiv Registry Agency. The entry includes declared material interest in the amount of BGN 41 307.13.

Bivol have called an employee of Kalisto Mati, who told them she couldn't recall such donation, commenting only with: "Donation? Common!" and refusing to get the owner on the phone.

According to the publication, Kalisto Mati is a relatively large company, making its business and profits precisely from construction, thus such donation and generosity appear quite suspicious.

Tsatsarov could not be reached for comment, despite numerous attempts of the investigative journalists.

The apartment is listed in his 2007 property declaration with the National Audit Office, NAO, but is described as a real estate purchase made with money coming from salaries.

Legal experts, cited by Bivol, say that such discrepancy can be explained either with a mistake when listing the transaction in the property registry, or an attempt to legalize income before NAO, and/or concealment of income on the part of Kalisto Mati.

Tsatsarov has also rejected Bivol's attempts to obtain explanations about another property case, involving his spouse, Meglena Tsatsarova, and implicating her in tax evasion.

On Wednesday, the site wrote that in 2008 Tsatsarova, a notary public, has been involved in a deal where the actual price of two real estate properties has been purposefully concealed. She and her colleague, Adela Katz-Boyadzhieva, wife of attorney, Ivan Boyadzhiev, have purchased two orchards in the village of Kostievo, near Plovdiv. Under a mutual agreement with the seller, the price listed in the notary deed was 120 times lower than the actual one – BGN 1 000 instead of BGN 119 151.

In the aftermath, without talking to the authors of the publication, the Chief Prosecutor hopeful appeared on bTV, labeling the first publication an attack against his family that only made him firmer in his bid for the high office.

After not been available for comments for two days before the release of the above information, Tsatsarova sent Bivol a detailed email, explaining what happened during the transaction with the Kostievo orchards.

On bTV, her husband also offered lengthy explanations, however, both can be summarized with retelling the story described by Bivol, and admitting that the purchase amount listed was BGN 1 000. They, however, insist that taxes were paid by both buyers for the full amount of BGN 120 000, which, they say, exonerates them from tax evasion accusations.

However, legal experts, again quoted by Bivol, note that the property transfer tax must be paid before the deal is registered, not during its second declaration before NAO.

The notary public, who sealed the property transfer in 2008, has said she did not remember the concrete case and nevertheless was prevented by law to disclose details, but informed notaries are mandated to verify that the tax has been paid before finalizing the transfer. She confirms that such tax cannot be paid in the aftermath and the deal cannot be concluded without proof it has been paid.

In addition, parties in property transfer deals are not prevented from paying tax higher than the mandatory 2% from the sale's price.

Meanwhile, the Bulgarian "Praven Svyat" (Legal World) magazine writes that Tsatsarov, a senior judge and Chief Prosecutor candidate, obviously has views quite different than article 313 from the Penal Code, postulating that confirming a false statement in writing is also a crime. The explanation stems from comments of Tsatsarov before bTV that "if one of the sides in the contract desires to not list the real price, this is not a violation of the law."

Bivol remind they still await documentation on when the tax for the orchards has been paid, which they have requested from Meglena Tsatsarova.

In an interview for the Bulgarian 24 Chassa (24 Hours) daily, Tsatsarov commented regarding the above that the smear campaign, as he expected, had already been launched.

The journalists stress they will also conduct investigations in the property status of the two new Chief Prosecutor candidates – Deputy Chief Prosecutor, Galina Toneva, and the Chief of the Specialized Anti-mafia Prosecutor's Office of Appeals, Borislav Sarafov. Both were nominated after the first publication on the property acquired by Tsatsarov's spouse.