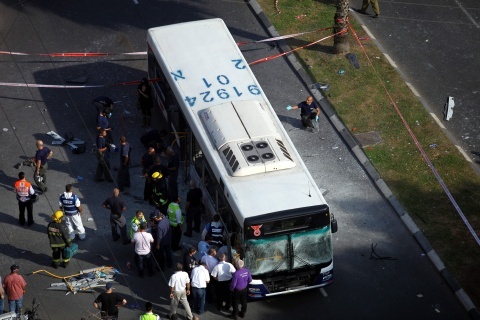 A general view of the scene after a terrorist attack on a bus in central Tel Aviv, Israel, 21 November 2012. Photo by EPA/BGNES

Israel has arrested several Palestinians in the West Bank and an Israeli Arab, suspected of involvement in a bomb attack on a Tel Aviv bus.

The blast, which injured 29 people, came just hours before a ceasefire between Israel and Hamas on Wednesday.

It was the first such attack in Tel Aviv for more than six years.

Israel launched an offensive against Gaza, which it says was aimed at ending rocket fire from Gaza, with the killing of a Hamas military leader last week.

Israeli military spokeswoman Avital Leibovich said the Israeli bus bomb suspect was "an Arab-Israeli from Taybe and a member of Hamas".

Officials said that a number of Palestinians affiliated with Hamas and Islamic Jihad in the West Bank were also arrested, suspected of having recruited the man to carry out the bombing.

After planting the device, the man called his Palestinian handlers, who detonated it remotely by calling the phone, he added.

In a statement, Israel's security agency Shin Bet said the arrests had happened "a few hours after the attack".