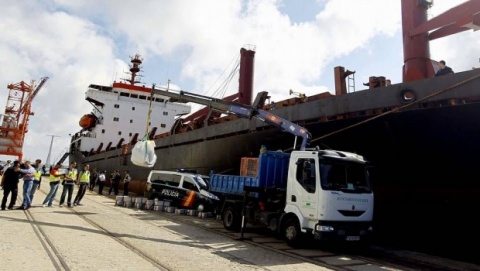 On August 13, the Sveti Nikolay vessel was intercepted off Spain's southern coast with 3 tons of cocaine onboard. Photo by BGNES

The Bulgarian Embassy in Madrid is going to send a letter to Spanish authorities to request the observation of the rights of the Bulgarian sailors detained in Spain on drug trafficking charges.

The information was reported by the Bulgarian Foreign Ministry press office.

One request is to provide the sailors with a translation in Bulgarian of the written indictment. The Bulgarian Consul is also reiterating his request to visit the detainees in prison. He already made such visits twice, but has requested a third one a month ago and has not yet received authorization.

The sailors, however, have not approached the Embassy to ask for help or for a translator. Very soon after the arrest, the Spanish authorities appointed lawyers for them and an interpreter. The Spanish attorneys have decided to not appeal the charges at the moment. The sailors were told what these charges involved, but have not been provided with them in writing.

The Embassy has not been given the indictment either and any other documentation from the probe, but the Spanish authorities are not mandated to do so, since the diplomatic mission is not a side in the case.

On Sunday, the Bulgaria attorney of the sailors and expert on maritime law Vladimir Vladimirov informed that the charges have been pressed. Relatives said Monday the detainees missed the 3-day deadline to appeal them because they received the text in Spanish, adding the lack of translator prevented them from communication with their lawyers.

The sailors are dispersed in four different jails, and their families are yet to receive permission to visit them.

On August 13, the Saint Nikolay ship was intercepted off Spain's southern coast with 3 tons of cocaine onboard. A total of 31 sailors, including 21 Bulgarians, were arrested. They were remanded into custody by the Spanish court until the investigation of the matter is wrapped up.

According to the indictment, of which the Bulgarian news agency BTA has obtained a copy, the ship captain, Ivan Stanchev, had held two meetings in Madrid where the transport of the illegal load was negotiated while the crew was supposed to be paid EUR 180 000.

The investigation further reports that the ship had turned off its identification system and one of the sailors had resisted arrest.

BTA further informs that a Bulgarian prosecutor, investigators and employees of the Main Directorate for Combatting Organized Crime, GDBOP, have traveled to Spain and attended the interrogations of the sailors as observers only.

The August operation, codenamed Cartel, was carried out jointly by Bulgaria's Main Directorate for Combatting Organized Crime, GDBOP, the French police, the US DEA and the UK COCA.

The cocaine was of very high grade and its value is estimated at around EUR 150 M.

The manager of the Seaborne Trade company, Doychin Doychev, was arrested in Bulgaria along with two other individuals, but all were released later.