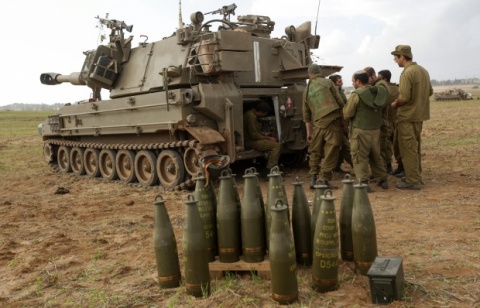 Israel is ready for a ground operation in the Gaza Strip. Photo by EPA/BGNES

Israel is ready for a ground operation in the Gaza Strip but prefers a diplomatic solution, according to a report.

"Israel is prepared and has taken steps, and is ready for a ground incursion which will deal severely with the Hamas military machine," a senior official close to Prime Minister Benjamin Netanyahu has told Reuters, as cited by Ynetnews.

However, the official has clarified that Israel would prefer to see a diplomatic solution that would guarantee the peace for the country's population in the south.

"If that is possible, then a ground operation would no longer be required. If diplomacy fails, we may well have no alternative but to send in ground forces," the official has said.

On Sunday, US President Barack Obama also stated that it would be "preferable" to avoid a move into Gaza.

The death toll in Gaza climbed to at least 90 on Monday as Israel continued to strike targets within the Palestinian enclave and UN Secretary-General Ban Ki-moon headed to Egypt to attempt to secure a ceasefire.