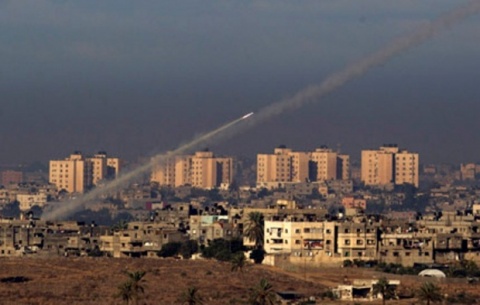 Israel's pounding of Gaza in operation Pillar of Defense has entered its sixth day Monday. Photo by EPA/BGNES

In the sixth day of the conflict, Ban Ki-moon informs he was going to Cairo to join ceasefire talks.

BBC reports that Sunday has been the bloodiest day of Operation Pillar of Defense when Israel targeted the homes of Hamas militants.

The operation to stop Hamas from firing rockets into Israel was launched Wednesday with an airstrike that killed Hamas military chief Ahmed Jabari.

The death toll has reached 83 – 80 Palestinians, among them children, and three civilian Israelis who were killed Thursday.

The shelling of Gaza continued in the early hours Monday with one blast destroying a Hamas police headquarters.

BBC further reports that one strike on the Gaza City house of Hamas policeman Mohamed Dalou killed at least 10 people, including at least nine members of his family.

Ban Ki-moon said he was deeply saddened by the deaths of the Dalou family and other Palestinians, while expressing alarm at the continued rocket fire from Gaza against Israeli towns.

"This must stop," he stressed in a statement released late Sunday. "I strongly urge the parties to cooperate with all efforts led by Egypt to reach an immediate cease-fire."

Hamas's military wing vowed revenge while Israel's IDF, cited by Haaretz, explained the strike had hit a neighbor's house by mistake because of a "technical error"

At least 26 Gazans were reportedly killed on Sunday, including 14 women and children, Palestinian health officials said.

Israel's army announced it had targeted around 80 sites overnight, including militant-owned buildings, weapons storage facilities and police stations, bringing its total to 1 350 sites targeted since Wednesday.

Hospitals in Gaza are overwhelmed and suffer shortages of medical supplies while many families are running out of food and water, with most trapped in their homes in the dark over power cuts.

One rocket had been fired out of Gaza towards Israel overnight.

Prime Minister Benyamin Netanyahu said Sunday he was ready to expand the operation. Israel earlier put 75 000 reservists on stand-by amid speculation of a ground invasion.

Before the recent offensive operation, Israel had repeatedly carried out air strikes on Gaza, as Palestinian militants fired rockets across the border.

Egyptian President Mohammed Mursi, quoted by BBC, has said an Israeli ground invasion will have "serious repercussions," and Egypt would never accept it "and neither will the free world".

The Arab League, which met in emergency session in Cairo on Sunday, is sending a delegation of foreign ministers to Gaza on Tuesday.