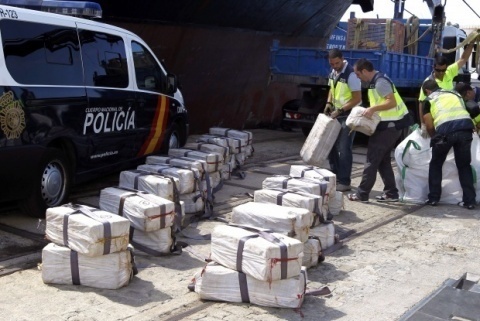 On August 13, the Sveti Nikolay vessel was intercepted off Spain's southern coast with 3 tons of cocaine onboard. Photo by BGNES

The Bulgarian sailors detained in Spain have already been charged, their attorney and expert on maritime law Vladimir Vladimirov said.

On August 13, the Saint Nikolay ship was intercepted off Spain's southern coast with 3 tons of cocaine onboard. A total of 31 sailors, including 21 Bulgarians, were arrested. They were remanded into custody by the Spanish court until the investigation of the matter is wrapped up.

Speaking Sunday for TV7, the lawyer explained that the Bulgarians are charged as accomplices in the illegal trafficking of cocaine, while the main charges were against several Spanish and foreign citizens.

Vladimirov labeled the grounds for the charges "weak" with the prosecution using as evidence only cell phones, computers, and flash drives seized from the sailors.

"If the detention of the ship and of the crew was on the request of Bulgarian authorities, then Spain has a plausible explanation for its actions. Otherwise this is inadmissible under international legislation," he stressed, adding the main issue now was if the fate of the sailors will be decided in Spain or Bulgaria.

The lawyer said he believed very soon the Spanish probe will turn its attention to the manager of the ship, Doychin Doychev.

He also informed he was yet to receive an expert report on the busted drug to establish if it came from South America or Africa.

The August operation, codenamed Cartel, has been carried out jointly by Bulgaria's Main Directorate for Combatting Organized Crime, GDBOP, the French police, the US DEA and the UK COCA.

The cocaine was of very high grade and its value is estimated at around EUR 150 M.

The manager of the Seaborne Trade company, Doychin Doychev, was arrested in Bulgaria along with two other individuals, but all were released later.