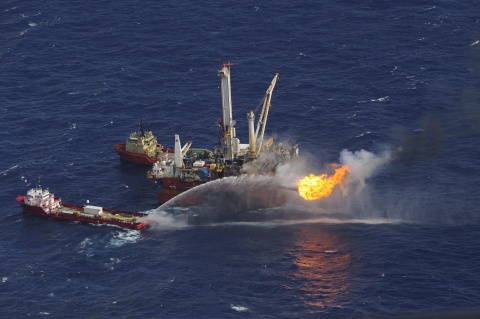 A file photograph dated 03 July 2010 showing the oil rig Q4000 at the site of the BP Deepwater Horizon oil well spill site in the Gulf of Mexico off the coast of Louisiana.

An oil rig has exploded off the coast of Louisiana, killing at least two workers and sending four others to hospitals Friday while two others were believed to be missing, the US Coast Guard has announced.

Petty Officer Carlos Vega, a Coast Guard spokesman said, as cited by CBS, that the fire, which has not been put out, was the result of an oil rig explosion approximately 20 nautical miles southeast of Grand Isle, La.

CBS Houston affiliate KHOU-TV reports two workers had died and another two were missing, according to the Coast Guard.

Four other injured workers were air-lifted to a hospital, Kirk Trascher, a spokesman for the rig's owner, Black Elk Energy in Houston, told KHOU-TV.

Petty Officer 3rd Class Jonathan Lally, another Coast Guard spokesman, did not immediately have information on the conditions of those taken to hospitals.

Coast Guard Capt. Peter Gautier told CBS New Orleans affiliate WWL-TV that 28 people were believed to be aboard the rig in the Gulf of Mexico.

Gautier said the platform was not actively producing oil and it is not believed there is any chance for a major environmental disaster.

He said initial reports were that maintenance workers were cutting into a pipe and that oil may have escaped, causing the explosion.

There was no immediate word if any oil had spilled from the platform. Lally said two helicopters, an airplane and small boats were sent to the area.

David Smith, a spokesman for the US Interior Department's Bureau of Safety and Environmental Enforcement, said a team of environmental enforcement inspectors was dispatched from a Gulf Coast base by helicopter soon after the Coast Guard was notified of the emergency.

Smith said the team would scan for any evidence of oil spilling and investigate the cause of the explosion.

A Louisiana parish official said the rig is not drilling at a deepwater site like the Macondo well that blew out in 2010. That blowout led to an explosion that killed 11 workers and led to the worst offshore oil spill in US history.

Jefferson Parish Councilman Chris Roberts told WWL-TV that the platform is a shallow water platform. The US Coast Guard said it has activated a command center to investigate the fire.

The platform is a production platform, unlike the Deepwater Horizon rig, which was drilling an exploratory well for oil giant BP in mile-deep water well to the east of Friday's reported explosion.

Black Elk is an independent oil and gas company. The company's website says it holds interests in properties in Texas and Louisiana waters, including 854 wells on 155 platforms.