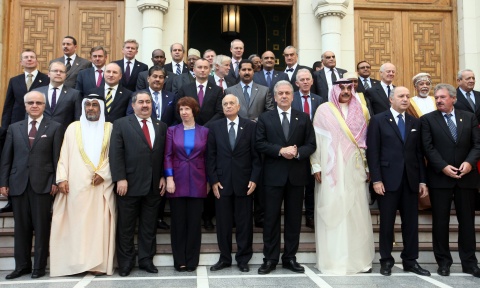 Arab League and EU foreign ministers pose for a group photo after their meeting in Cairo Tuesday. Photo by EPA/BGNES

Al-Khatib spoke Tuesday to an Arab League and EU foreign ministers' meeting, convened in Cairo to discuss the situation in Syria.

Formed earlier in November, the National Coalition for Syrian Revolutionary and Opposition Forces brings together the Syrian National Council and other opposition organizations.

It is presided by Ahmad Mouaz Al-Khatib Al-Hasani, a geophysicist that later served as imam in the great Ummayad Mosque in Damascus.

Tuesday addressing foreign ministers from the Arab League and the European Union, Al-Khatib said that the Council needs more weapons "to put an end to the suffering and bloodshed" in Syria.

In his address, he also underscored that the new coalition has been formed after extensive negotiations and is representative of the great majority of opposition forces within Syria.