No Problem with Macedonia, Just with Nationalist Rhetoric - Bulgarian FM 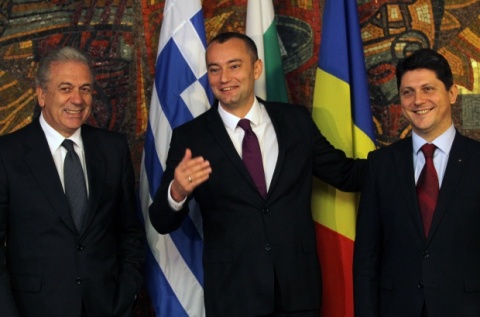 The foreign minsiters of Bulgaria, Greece, and Romania held a meeting in a trilateral format as the representatives of the three major Balkan EU member states. Photo by BGNES

Bulgaria does not have a problem with Macedonia and its aspirations for EU membership but with the nationalist rhetoric of some of its political leaders, Bulgarian Foreign Minister Nikolay Mladenov declared at a trilateral meeting with his Greek and Romanian counterparts.

Bulgaria, Greece, and Romania have thus set out to "speak with one voice" in the European Union, their foreign ministers made it clear at their trilateral meeting.

In addition to Mladenov, the Foreign Ministers of Greece and Romania have also made it clear that Macedonia needs to prove its good-neighborliness before it can be allowed to join the European Union.

In their words, Macedonia's EU path needs to rest on a resolution of its "name dispute" with Greece – which has been blocking Macedonia's NATO and EU integration since the former Yugoslav republic is claiming a name that is also borne by an administrative district in Northern Greece – as well as on the Macedonian leaders' ability to do away with their nationalist rhetoric and verbal assaults on Bulgaria.