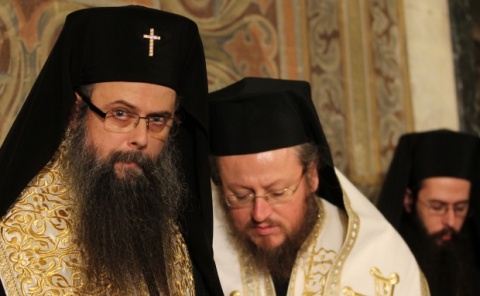 Controversial Bulgarian Bishop Nikolay (l) is one of the few in the Holy Synod, who have not worked for the former State Security, but he is also much younger than the rest. Photo by BGNES

Plovdiv Bishop Nikolay has announced Monday his official position on the selection of Varna metropolitan Kiril to serve as interim Sofia metropolitan bishop and interim head of the Bulgarian Orthodox Church.

In an open letter to the Holy Synod, Nikolay states he intended to keep silence for 40 days and skip attending the Synod's meetings.

Kiril was elected Saturday interim patriarch by the Holy Synod of the Church at a special sitting.

In the letter, Bishop Nikolay shares his alarm about the decision such as holding a secret vote where Kiril received support of 7 of the 12 attending metropolitans. He cites the Holy Synod Code requiring the presence of all 15 bishops.

"Article 63, paragraph 2, of the Code of our Church postulates that the Holy Synod must make all its decisions with a majority of more than half of all its members. This condition cannot be debated. It also includes the requirement for the vote of the Holy Synod to always be an open one in order to give all members the opportunity to voice an opinion even to those who cannot attend for some reason such as illness. They can vote in writing or on the phone," Nikolay writes.

The Bishop notes the secret vote violates the rights of absent members and shows some bishops have made inadmissible deals under the table.

He concludes with informing that he wished to spend the next 40 days in mourning, prayer and reflection, as his Christian faith required. Nikolay further asks the Holy Synod to excuse his absence should they decide to meet in the next 40 days.

On his part, Plovdiv bishop Nikolay, Bulgaria's youngest metropolitan, is renowned for his hardline religious stance and controversial statements about gays, the US pop star Madonna, and surrogate mothers, among others.

He opposed vehemently the visit of Pope John Paul the Second in Bulgaria, calling him a heretic, and is also known for his weakness for expensive watches and automobiles, and for walking around the laity in the company of burly bodyguards.

When the bishops Communist past was revealed, he called on them to repent and/or resign.