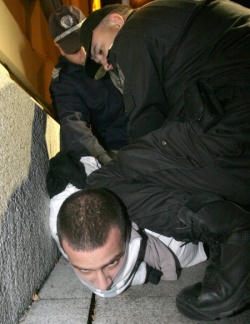 Several protesters were arrested by the police, some for throwing stones at the Parliament building during the Anonymous rally on November 5, 2012. Photo by BGNES

Only about a dozen protesters showed up at what was supposed to be a merger protest rally against police brutality in Bulgaria's capital Sofia Sunday night.

The handful of protesters for the rally for which some 2 000 had signed up on Facebook were guarded by 5 police patrols.

The anti-police brutality rally was supposed to be a follow-up of the Anonymous protest organized in Sofia earlier this week, which surprisingly attracted several thousand protesters shouting government slogans and hurling pavestones at the Bulgarian Parliament building.

Sunday's failed rally especially intended to protest the arrest of a youngster at the Anonymous rally for allegedly breaking a window of the Parliament building on November 5.

According to the social media organizers of the rally, the protester in question was arrested unlawfully, and that we was arrested for protesting, while somebody else broke the Parliament's window.

A photo story of the Anonymous anit-government rallies in Bulgaria on Monday, November 5, 2012, VIEW HERE