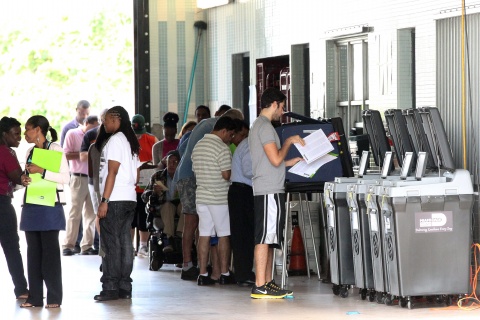 Voters cast their ballots at a fire station in the 2012 US presidential election in Miami, Florida, USA, 06 November 2012. Photo by EPA/BGNES

US President Barack Obama, who already secured his reelection, is expected to win the final key battleground state where ballots are still being counted – Florida.

Analysts have commented that even though Obama does not need Florida to secure his re-election, he looks slated for victory there too.

He won by sweeping up other vital swing states, including hard-fought Ohio and Virginia.

Democrats have meanwhile expectedly voiced confidence that Florida will fall in President Barack Obama's column too even though the race is too close to call with some 200,000 ballots still needing to be tallied, according to latest results.

"I think later this morning, you'll see the opportunity to change that from yellow to blue. The numbers have moved in President Obama's direction," Debbie Wasserman Schultz, chairwoman of the Democratic National Committee and US congresswoman from Florida, said on CNN's "Starting Point with Soledad O'Brien."

Obama has won so far at least 303 electoral votes to 206 for his Republican challenger Mitt Romney.

The president and his family are expected to return from Chicago to the White House later on Wednesday.