E-Mail Voting Creates Confusion in Sandy-Ravages Parts of US 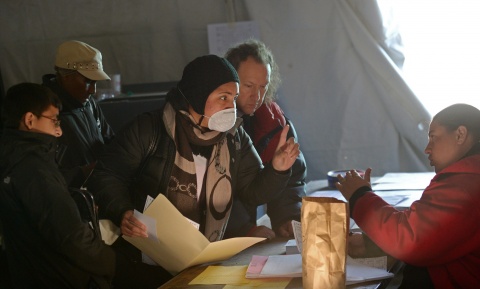 Voters talk to a poll site worker and try to figure out where to vote at a polling site located in a tent due to the area`s continued recovery from Hurricane Sandy in the 2012 US presidential election in the Rockaways, NY, 6 Nov 2012. EPA/BGNES

Citizens in storm-ravaged New York and New Jersey wandered from poll to poll after officials moved more than 240 balloting sites and fretted over the integrity of a vote being conducted partly over the Internet.

Governments strained to allow voters to participate in the election despite damage from Hurricane Sandy, Bloomberg News reported.

In New York City, where almost 60 polling places were moved, the Metropolitan Transportation Authority was running election shuttles from stricken areas. In Long Island beach towns, residents emerged from the rubble to vote. And across New Jersey, county officials tried to cope with Republican Governor Chris Christie's decision to let displaced residents submit ballots via e-mail or fax until 8 p.m.

Following reports of long delays and voter confusion, New Jersey extended the deadline for clerks to count those e-mailed and faxed ballots until Nov. 9 at 8 p.m., according to an order from Republican Lieutenant Governor Kim Guadagno.

"The counties and the state are committing all available resources to quickly process e-mail, fax, and mail-in ballot applications and to send qualified voters a ballot," she said in a statement. "Notwithstanding these efforts, it has become apparent that the county clerks are receiving applications at a rate that outpaces their capacity to process them."

A request for an absentee ballot submitted through the Essex County clerk's website yesterday morning hadn't been answered by 3:45 p.m. today. A call to the office of County Clerk Christopher Durkin wasn't answered.

The disruption, at least in the presidential race, will be more personal than political. New York and New Jersey aren't considered swing states, and opinion polls show President Barack Obama will win both in the contest with Republican Mitt Romney.

Confusion cropped up across the region, where many places still lack power one week after the Atlantic superstorm knocked out power to more than 8 million customers. Almost 974,000 were without electricity in the Northeast.