Maxim Behar at First Global PR Summit: Watch Out for the East, Europe 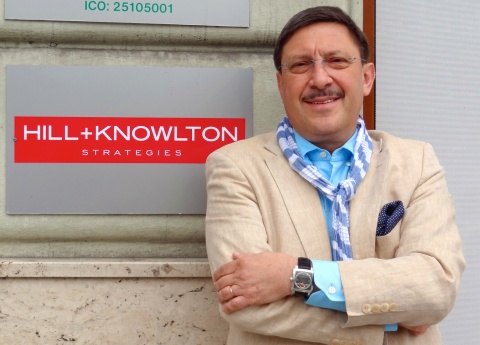 Everybody is now looking to the East but they should also keep an eye on Europe as well, Bulgarian PR expert Maxim Behar told participants in the First Global PR Summit in Miami, FL.

"Everybody is now looking to the East but I would advise them to shift their sight from Asia and check out Europe as well. The PR business in Eastern Europe is undergoing a very dynamic development, and a lot of innovative ideas are coming precisely from there," the Bulgarian PR guru said.

Maxim Behar was the only representative of Eastern Europe at the First Global PR Summit in Miami which featured some 450 participants from all over the world.

Behar was one of the speakers in the panel on the developing markets together with representatives of China and India. He also moderated two working brunches devoted to Eastern Europe as part of the First Global PR Summit organized by renowned PR analyst Paul Holmes.

"When we're discussing the new media, the social media, we should fail to stress that precisely Eastern Europe has come very far ahead in their utilization. In order to organize a successful social media campaign, it is no longer necessary to be present solely on the local market because our business is becoming more and more global. The young people in Eastern Europe are very strongly motivated to succeed, to prove themselves; they indisputably have many innovative ideas, and a lot of successful projects for global clients come exactly from this part of the world," Behar told the forum in his presentation.

Behar aslo took part in the annual meeting of the Board of ICCO, the largest PR organization in the world, in which he has served as a Treasurer and member of the Executive Board since 2010.

The First Global PR Summit was completed with a gala dinner during which the famous SABRE awards were presented. Organizer Paul Holmes ambition is to hold the Global PR Summit in Miami each year in order to analyze, assess, and define the development of global PR business.

Just a week ago, Maxim Behar was voted Bulgaria's "Manager of the Year" for 2012 in the online vote of the largest Bulgarian private TV channel bTV as part of the annual top managers' contest of the renowned magazine "Manager".

Two months before that Maxim Behar was awarded as a Distinguished Honoree in the Executive of the Year in Advertising, Marketing, and PR category by the International Business Awards, aka The Stevies.

Behar, who manages one of Bulgaria's top PR agencies – M3 Communications Group, Inc. - is also a member of the board of the prestigious communications forum, Communication on Top, based in Davos, Switzerland. Since 2004, he has been the Honorary Consul of the Republic of Seychelles in Bulgaria. Since January 2012, Behar is the chairman of the Prague Office of the largest PR corporate in the world, Hill+Knowlton Strategies, in the Czech Republic.