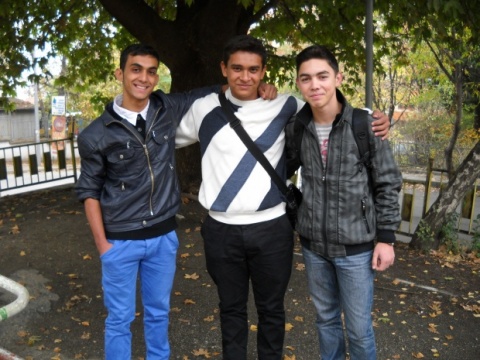 Three Roma teens from the central Bulgarian city of Stara Zagora say Roma youth are waking up, want to receive good education and transform their community. Photo by DarikNews

Young Roma from the central Bulgarian city of Stara Zagora have apologized to their country for three other teens from their minority mocking and deriding national heroes.

They have published online a new video clip, showing them performing the National Anthem and sending a message to the Roma community.

"We dream of seeing Roma changed, educated and responsible," they say in the video, cited by Darik Radio.

The Anthem is sung by teen Roma Deyan Sevov, 14, a student at the musical school in Stara Zagora.

"In connection with the offensive picture published on social networks, we wish to apologize and say that the Roma should not be labeled by the behavior of 2-3 teens. We want to say that we, the Roma, we love Bulgaria," says Sevov, who plays the piano since the age of four, loves to compose music and is passionate about film music. He attributes his success to his family.

One of his friends, Asen Petrov, chimes in that young Roma are waking up and trying to change their community. He adds that his own dream was to receive good education and become a dignified citizen of Bulgaria.

"The Anthem unites all of us – Bulgarian, Roma, Turks. We received the support of our friends, relatives and classmates. Our teacher told us she cried when watching the video," the boys further tell.

By the end of the year the three plan to release a video against early Roma marriages. They say they do not want to repeat the mistakes of their parents and all are firm they will continue their studies.