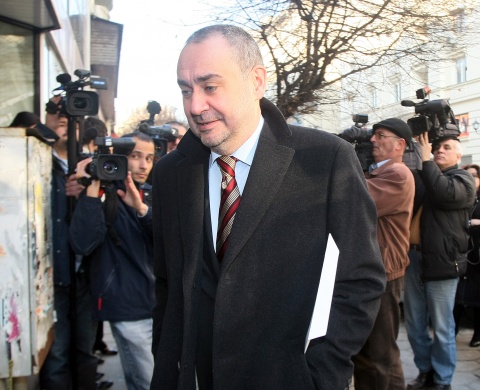 Outgoing Bulgarian Chief Prosecutor, Boris Velchev, resigned ahead of his term in order to assume his new job as constitutional judge. Photo by BGNES

Boris Velchev, the outgoing Bulgarian Chief Prosecutor, firmly believes that his successor must be someone from the Prosecutor's Office, a prosecutor who knows the issues in the system.

Speaking Monday in an interview for the Bulgarian national Radio, BNR, Velchev stated that during his 7-year term the prosecution worked in a "more than transparent" manner, adding every newly-appointed chief of a large institution always feels they must start from scratch.

"I hope that the next Chief Prosecutor will continue on the path I set, but without my romantic attitude. Whoever this person is, he or she will be rumored to have connections with powerful politicians," he said in commenting on many labeling him "a prot?g? of former left-wing President, Georgi Parvanov.

Velchev admitted openly for the first time that at some point the comments of the Interior Minister and other people from the police have become an obstacle for the work of the prosecution. He said another hurdle was the huge media interest in pursuing new facts, blowing some problems out of proportion, and offering a tribune to emblematic defendants.

Regarding the recent not-guilty verdicts of ex Defense Minister, Nikolay Tsonev, and co-defendants, Petar Santirov and Tencho Popov, the outgoing Chief Prosecutor also admitted it was a gaffe of the prosecutors, and voiced doubts in the very grounds of having such trial.

Velchev gave as example for success during his term the nonexistence in the last few years of powerful and large organized crime groups in Bulgaria, compared to 10 years ago, dealing with racket, illegal drugs trafficking and smuggling.

"A small part of their leaders have effective sentences; others are being tried in Court and await verdicts; others are defendants, and another part escaped the country and we have no idea where they are. The groups are gone and this is a good result," he concluded.

On Friday, Bulgarian President, Rosen Plevneliev, issued a decree to officially release Velchev from the post of Chief Prosecutor.

Velchev was nominated for constitutional judge by the President on October 20, 2012, and must take the oath of office within one week after the October 31 official decree for his appointment.

For this reason, he submitted his resignation Thursday before the Supreme Judicial Council, VSS. The resignation was approved unanimously. On Tuesday, VSS is to appoint an acting Chief Prosecutor.

VSS is also expected to launch the procedure for electing the country's new Chief Prosecutor in the next few days, but before doing so, they must prepare the election rules.

The deadline for the above is November 23, because under the law the procedure must be open no earlier than 6 months and no later than 3 months after the term of the Chief Prosecutor expires.

Two names have been circulating lately as top contestants to replace him - his Deputy, Galina Toneva, and the Chairman of the Plovdiv Regional Court, Sotir Tsatsarov, who is rumored to be well-liked by the ruling Citizens for European Development of Bulgaria party, GERB.

In addition to hinting his replacement must be a prosecutor, Velchev said earlier he had a favorite, but declined giving a name on grounds the procedure is yet to be open.

Meanwhile, Boyko Naydenov, the newly reelected head of the Bulgarian National Investigation Services, hinted he is inclined to enter the race for Chief Prosecutor.

Velchev's 7-year term in office as Chief Prosecutor began in 2006. He used to be the legal advisor of former left-wing President Georgi Parvanov. His Chief Prosecutor's term was set to expire in February 2013.