Attack US Mission in Benghazi Was 'Mainly' CIA Operation - Report 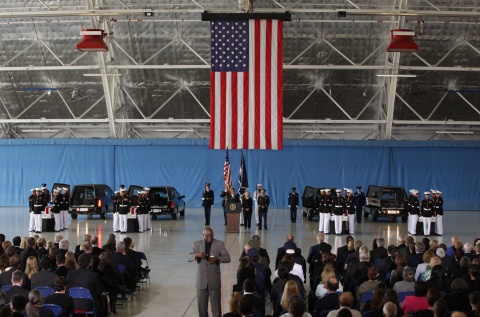 US President Barack Obama speaks with Secretary of State Hillary Clinton (C-R) at his side, during the return to the USA of the remains of the four Americans killed in Benghazi, Libya, Joint Base Andrews, Washington DC, 14 September 2012. EPA/BGNES

The US mission in Benghazi that came under attack by militants on September 11 was mainly a secret CIA operation, the Wall Street Journal reported Friday, shedding new light on the deadly assault.

US President Barack Obama's administration has faced a storm of pre-election questions about why there was not more security at the US consulate where four Americans, including Ambassador Chris Stevens, were killed on September 11.

The Wall Street Journal said the mission was mainly a CIA operation, adding that of the 30 American officials evacuated from Benghazi following the assault, just seven worked for the State Department.

It also identified the two security contractors killed in the attack - former Navy SEALs Tyrone Woods and Glen Doherty - as working for the Central Intelligence Agency and not the State Department.

In a break from tradition, it said CIA Director David Petraeus did not attend the ceremony when the coffins arrived back on American soil in order to conceal the CIA operation in Eastern Libya.

It said the nearly two dozen CIA operatives secretly worked out of a separate building known as the "annex," where officials at the consulate had retreated following the initial attack before coming under fire again.

The operation, which hit the ground shortly after the start of the February 2011 revolt that overthrew Libyan dictator Moamer Kadhafi - was aimed at counterterrorism and securing heavy weapons held by the embattled regime.

The Journal suggested that the security lapse may have been due to miscommunication between the CIA and the State Department, with the latter assuming the annex security team was a sufficient backup for its own guards.

"They were the cavalry," it quoted a senior US official as saying.

The Journal said that the day after the attack, the CIA sent Libyan security officials to the annex to destroy classified documents and sensitive equipment while leaving the charred and ransacked consulate - which by design had contained no classified materials - unattended.