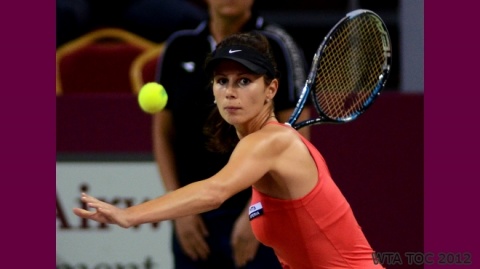 Bulgaria’s Pironkova will continue in the next phase of the prestigious tournament in Sofia even if she loses her match against Nadia Petrova on Friday. Photo by www.sofia-tennis.bg

Bulgaria's best tennis player Tsvetana Pironkova secured a place in the semi-finals at Qatar Airways Tournament of Champions in advance.

This happened after Russia's Maria Kirilenko withdrew from the tournament on Thursday, citing an upper respiratory illness.

Kirilenko made the announcement shortly after she lost to second-seeded Nadia Petrova 3-6, 7-6 (7-4), 6-3 in a long and exhausting match.

Petrova and eighth-seeded Pironkova will meet for the group title Friday with the winner going against Vinci in Saturday's semifinals and the loser drawing Wozniacki.

The Bulgarian will continue in the next phase even if she loses her match against Nadia Petrova on Friday and Jie Zheng defeats the first alternate from Sweden Sofia Arvidsson.

If Pironkova wins against the Russian, she will be the leader in group “Sredetz”.