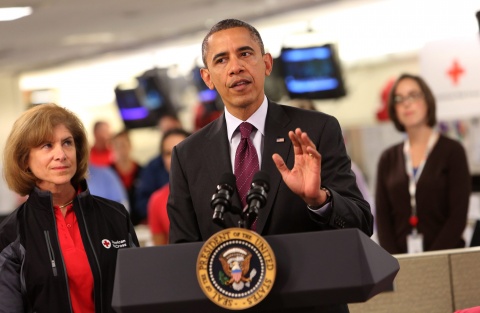 As US President Barack Obama resumed his election campaign, new polls indicated he is likely to defeat Mitt Romney in the swing states of Iowa, Wisconsin and New Hampshire.

Just days before Election Day, analysts say the results from the polls bear great significance as Romney needs to win all three states if he loses Ohio, a key state to both candidates.

"To be at 49 or 50 (percent) is a good number this close to Election Day," said Lee Miringoff, director of the Marist College Institute for Public Opinion, as cited by USA Today.

"But he (Obama) doesn't have to look far over his shoulder to see that half of the electorate isn't with him and Romney is close."

On Thursday Obama's campaign is going through Nevada, Colorado and Wisconsin.

On Wednesday, he toured parts of New Jersey struck by the storm with Republican Governor Chris Christie.

Romney held two rallies in Florida on Wednesday, where his campaign said he tried to strike a "positive tone".

Election day is on 6 November, and all surveys show this will be a neck and neck race.