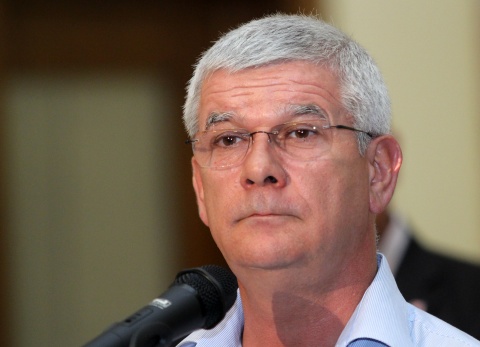 Kiril Vatev, Chair of the Association of Meat Processors in Bulgaria, has cited decreased consumption as the biggest challenge before the Bulgarian food industry. Photo by BGNES

Kiril Vatev, Chair of the Association of Meat Processors in Bulgaria, has cited decreased consumption as the biggest challenge before the Bulgarian food industry.

Speaking Thursday at a discussion on the future of the food industry and the challenges it faces, he said that years the consumption of Bulgarian products had fallen dramatically over the past few years.

Vatev explained that the economy would remain in the dumps for as long as Bulgarians continued to opt for cheap imported goods.

He argued that the decreased consumption of Bulgarian food products was one of the most serious problems Bulgarian producers faced.

"It is a concept with multiple meanings, it is not in the power of one sector or one Minister and it does not depend on one factor, whatever it may be. It takes very complex efforts to make the whole world notice high-quality Bulgarian products. Three years ago, until 2009, demand for expensive and high-quality food products was on the rise," Vatev stated.

Mariana Kukusheva, Chair of the Federation of Bread Bakers and Confectioners in Bulgaria, also admitted the problem of decreased consumption of locally-made products, urging consumers to buy more goods made in Bulgaria.

She said that the principles of healthy eating involved consuming locally grown or raised foods.

"In Bulgaria we somehow got used to the consumption of Shopska salad from Polish tomatoes, Italian cheese, and Brazilian cucumbers. This will not help us develop a regional policy," Kukusheva said.

Representatives of the Bulgarian Food Safety Agency noted that as a result of the active control over manufacturing and processing enterprises in Bulgaria the share of closed warehouses had dropped by 5% in one year, while the share of discarded foods had dropped 26-fold.

Business » Be a reporter: Write and send your article
Tags: Association of Meat Processors in Bulgaria, Federation of Bread Bakers and Confectioners in Bulgaria, Shopska Salad, decrease, imported goods, Made in Bulgaria
Advertisement
Advertisement
Expats.bg All Are Welcome! Join Now!
Related Articles:
More from Business