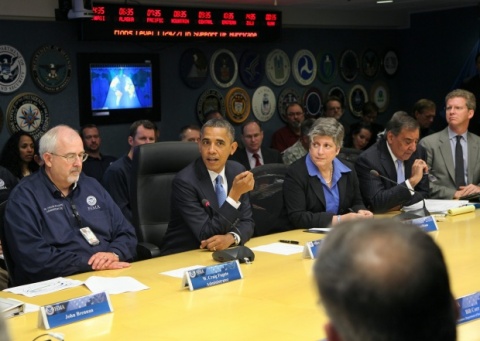 US President Barack Obama is set Thursday to resume his election campaign, after it was put on hold by monstrous storm Sandy, which hit the northeast of the country.

Storm Sandy left at least 74 people dead in the US, cut power from millions of homes and paralyzed transport on much of the East Coast.

Many of the casualties have been caused by falling trees. Sandy, which made landfall Monday night, brought a record storm surge of almost 14ft (4.2m) to central Manhattan, well above the previous record of 10ft during Hurricane Donna in 1960, the US National Weather Service said, cited by BBC.

BBC reports that in New Jersey some 20 000 people remain trapped in their homes by sewage-contaminated floodwater. More than six million homes and businesses across the northeast still have no electricity, and a third of them are in New Jersey.

In the New Jersey city of Hoboken, across the Hudson River from New York City, the National Guard has arrived to evacuate about 20 000 people and distribute meals.

The New York Stock Exchange and the NASDAQ are now opened on generator power.

A partial subway service is also due to begin on Thursday. Most public transportation buses are already back on the roads, and most of the city's bridges have reopened.

Flights have now resumed at JFK and Newark Liberty airports, but LaGuardia is still closed over heavy flooding.

As businesses and services in the US Northeast, which were shut over the storm, started to reopen and slowly come back to normal, President Obama is planning campaign stops Thursday in Nevada, Colorado and Wisconsin.

"You guys are in my thoughts and prayers," he said during a visit to an emergency shelter in Atlantic City. "We are going to be here for the long haul."

Christie, a Republican and firm supporter of Obama's rival Mitt Romney, lauded the Democratic President for his handling of the storm, speaking of his "great working relationship" with him.

"I cannot thank the President enough for his personal concern and compassion for the people of our state," said Christie.

Obama's Republican challenger, Mitt Romney, is also campaigning after halting the campaign earlier in the week.

Romney held two rallies in Florida on Wednesday, where he attempted to boast a "positive tone".

Election Day is on 6 November, and polls show very narrow margin between the two.

Eight out of ten voters in a Washington Post/ABC poll gave Obama an "excellent" or "good" rating for his handling of the emergency.

The cost of clearing up after storm Sandy has been estimated at USD 30-40 B.