Thousands of Flights Yet to Be Canceled over Hurricane Sandy 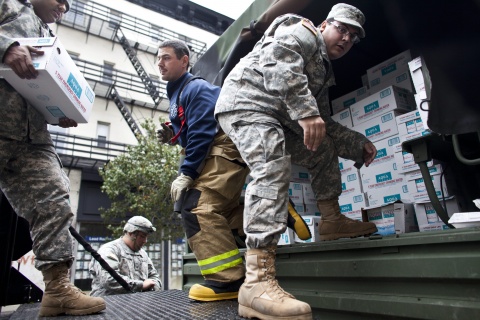 More than 19,500 flights have been canceled along the US East Coast as of Wednesday afternoon due to Hurricane Sandy.

There are still mass cancelations ahead even though most major metropolitan airports have reopened, international media have reported.

It is not known when New York's LaGuardia Airport will resume flights, as water continues to cover the tarmac making it unsafe for travel. The three major airports in New York City account for about a quarter of all US air travel.

More than 2,800 cancelations are scheduled on Wednesday for flights going to and from East Coast cities such as Washington, New York, Philadelphia, and Boston, according to the airline and flight-tracking website FlightAware.com.

The number of flight cancelations is expected to rise on Wednesday and Thursday, depending on how quickly JFK and Newark can resume full service and once the confirmed timeframe for the opening of LaGuardia is determined, FlightAware.com said.

Airlines have been canceling flights since Sunday due to Sandy, affecting airline flight schedules throughout the world and leaving hundreds of thousands of passengers stranded.

Flights have slowly started to trickle into the major airlines in the northeast US from international carriers, but not many domestic flights are leaving the runways, CNN reported.

The ability to get flights back into the air is also being impacted well below the ground. New York City's subway system is still shutdown due to flooding and the lack of mass transit is making it difficult for airline and airport employees to get to work.