Explosives That Killed Lebanese Security Chief 'Made in Bulgaria' - Report 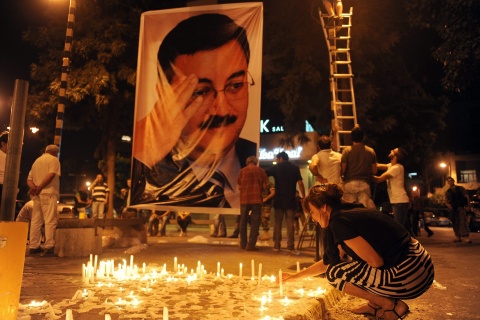 Lebanese woman lights candles in front the huge poster depicting General Wissam al-Hassan during a candle vigil near the site of a car bomb attack where he was killed, in the Achrafiyeh Christian residential area Beirut, Lebanon, 20 Oct 2012. EPA/BGNES

The explosives that were used to blow up Brig. Gen. Wissam al-Hassan, the intelligence chief of Lebanon's Internal Security Forces, in Beirut's recent terrorist attack, were produced in Bulgaria, according to media reports.

The Lebanese investigators have found that the explosives originated in Bulgaria, and are going to contact the Bulgarian authorities and the labs that produced them, the Lebanese newspaper Al Diyar reported, as cited by eastok.bg, a Bulgarian news site covering the Middle East.

According to the investigators, the respective type of explosives has been used for the first time for a terrorist attack in the Beirut blast. There are said to have exploded in small parts tearing everything up, which is why Lebanon's Internal Security Forces were unable to identify Gen. Wissam al-Hassan's distorted body for three hours after the blast.

Brig. Gen. Wissam al-Hassan, the intelligence chief of Lebanon's Internal Security Forces, and seven others were killed in the explosion on October 19, 2012, which occurred in Ashrafiya, a predominantly Christian district in East Beirut.

More than 80 others were injured. There was no claim of responsibility for the attack, the first car bombing in Beirut in four years.