EU Must Be Enlarged in Balkans, Bulgaria Tells EC 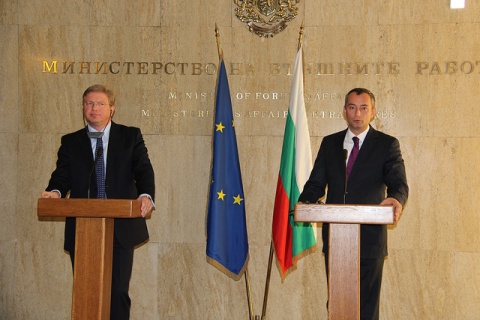 "When we were an EU candidate country, we gradually resolved key issues in relations with our neighbours that had been a burden for years. We are certain that the way that our neighbours in the Balkans, including Macedonia, must walk involves solving this kind of issues and identifying measures that improve trust between countries," Bulgaria's Foreign Minister stated Wednesday afternoon at a joint news conference with European Enlargement and Neighbourhood Policy Commissioner Stefan Fuele.

Commissioner F?le has the full support of Bulgaria in his work, because as a country that most recently joined the EU, Bulgaria has best seen the benefits of membership, he added.

"We stand for the idea that Europe should be expanded here on the Balkans. This is part of a major project to return peace and prosperity to our continent," Minister Mladenov said.

Mladenov made it clear he firmly believes that co-operation between Bulgaria and the EC Enlargement Directorate-General should increase so that the views of Bulgarian society could be appropriately reflected in the European Commission's initiatives.

EU Commissioner F?le said that Bulgaria has a key role in expansion, thanks to the country's successful experience in transition and its geographical location.

"Today I came to see how this potential can be fully implemented in the enlargement," Commissioner F?le said, adding that Bulgaria provides an important example for all countries in the region that want to become part of Euro-Atlantic structures.

He said that all the issues between Bulgaria and Macedonia could be solved on the basis of European values.

"We need to break away from the past, because accession negotiations foster a very favourable climate for the development and strengthening of good neighbourly relations, Commissioner F?le said.

Minister Mladenov expressed hope that by the end of the year a plan would be drafted and co-ordinated to "show the Bulgarian, Macedonian and European societies that our two countries are able to assist each other on Macedonia's road to the EU in the same way that we have already done for 20 years".

Earlier on Wednesday, during his meeting with Fuele, Bulgarian President Rosen Plevneliev made it clear that Bulgaria believes Macedonia is far from ready for EU accession talks because of the anti-Bulgarian propaganda of the authorities in Skopje.

“Bulgaria plays a key role in enlargement - a very welcome role. Thanks to its experience with successful transition and its unique geographic position, Bulgaria has a lot to gain from the enlargement process and also a lot to offer especially when it comes to its immediate neighbours - former Yugoslav Republic of Macedonia, Serbia and Turkey. I came today to discuss how Bulgaria's potential vis-?-vis the region could materialise fully and how the European Commission can help Bulgaria play an even more prominent and positive role,“ Fuele said in his statement in Sofia.

“Bulgaria as a Member State sets an important example to the countries of the region striving to become part of the Euro and Euro-Atlantic structures. I also came to Bulgaria today to better understand how Bulgaria's  current policy especially when it comes to the former Yugoslav Republic of Macedonia, is matching its own enlargement vision and potential as a key player in the region,“ he added.

“We understand that Bulgaria has concerns in this respect. But Bulgaria and the former Yugoslav Republic of Macedonia have strong and deep ties and we are convinced both countries can address and solve any open issues in a good neighbourly spirit based on the EU values and we are also making this point in our contacts with Macedonian authorities. I welcome the fact that Presidents have exchange letters, and that Ministers Mladenov and Poposki are contributing to improving relations between the two countries. I am confident that through constructive dialogue and common understanding real progress can be achieved,“ Fuele concluded.

Earlier, Bulgaria's President Plevneliev has thus in effect reiterated the position of Foreign Minister Nikolay Mladenov who recently made it clear that Bulgaria does not support Macedonia's EU entry unconditionally.

In a related development, in a special statement in August 2012, Bulgarian Foreign Minister Nikolay Mladenov reacted strongly to hate speech against Bulgaria in Macedonia media.