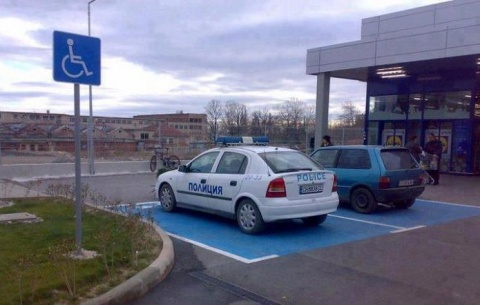 A picture from the Facebook group "Photograph a Policeman" shows a police patrol car parked at a handicap spot.

Bulgarians, outraged by the inactivity of the country's police, have launched a Facebook group "Photograph a Policeman" to collect discrediting information about the police authorities.

The news even made international headlines with the Russian news agency ITAR-TASS reporting that the group already has a number of damming pictures showing the policemen in embarrassing situations, such as parking on a handicap spot, using patrol cars for personal chores, stealing gasoline, drinking beer behind the wheel, playing cards when on duty, secretly dividing some money, and chatting in a friendly manner with a prostitute, among others.

The group was organized in the aftermath of the scandal, stirred by Kalinka Pencheva, official spokesperson of the police in the Bulgarian Black Sea city of Varna.

In July, Varna man Boyan Maximov took a picture of 3 police officers, apparently asleep in the patrol car, and spread it on social networks and later on TV, in what he says was a protest against the laziness and the incompetence of Bulgarian police.

In commenting on the case before bTV, Pencheva labeled Maximov "an idiot; a red neck idiot, who has nothing to do and is bored." Her comment provoked wide-spread indignation among the public and particularly in social networks, with demands for her dismissal.

The anger also skyrocketed over the fact Maximov insists that after publishing the picture he has been consistently harassed by the police with endless stops and fines on petty grounds, for example, not carrying an ID card when taking out the trash or walking his dog without a leash.

Pencheva was fired two days ago on the proposal of Prime Minister, Boyko Borisov, and with the approval of Interior Minister, Tsvetan Tsvetanov, on grounds she had violated the Ethics Code of the police.

The group already has over 3 000 members, and they are expected to grow.

Meanwhile, Tsvetanov announced that the case "Maximov" has been concluded. He voiced gratitude about the picture of the sleeping policemen becoming public, but added he thought the whole affair has ended in the summer.

"Pencheva's comments were inappropriate and I fail to understand why she made them months after the incident," he said Wednesday in an interview for Nova TV. He stressed the Interior Ministry has acted coherently and with integrity in the case.

It also emerged that Maximov will be tried next month for inflicting bodily harm.

In the interview Tsvetanov reiterated the Varna man had been involved in criminal activities such as illegal drug possession and owning a dangerous dog, but rejected claims the police have targeted him.