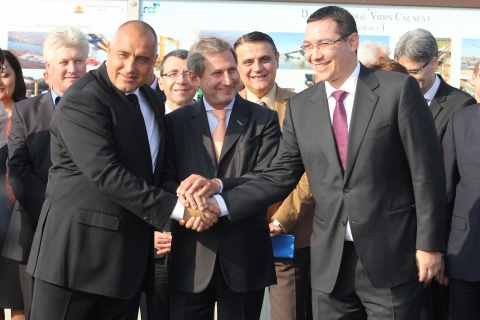 A memorandum has been approved for the establishment of a Bulgarian-Romanian that will operate the bridge, Ponta has revealed, according to the Focus news agency.

Ponta said that the company's headquarters will be in Bulgaria.

Danube Bridge 2, which links the Bulgarian town of Vidin to Romania's Calafat, will become fully functional in 2013. Over 100 000 vehicles are expected to pass through the bridge each year.

According to Bulgarian Transport Minister Ivaylo Moskovski, the facility will pay off in 12 to 15 years.

The final section of the bridge was finished last week and the entire construction between the Bulgarian and the Romanian Danube shores is now connected. The infrastructure was completed at the end of August.

The only finishing touches left are the hydro-isolation and the asphalt cover, which are expected to conclude by the end of the year, pending weather conditions. If temperatures fall, the works will be postponed for the spring. The Spanish contractor FCC informs that in order to do the above two, temperatures must be higher than 5C.