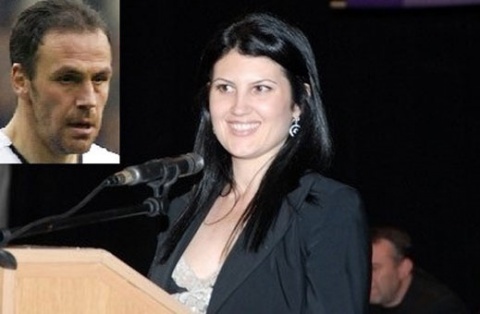 Krasimira Kishisheva was diagnosed with cervical cancer about two years ago during her husband's stint in England's Brighton. File photo

Former Bulgarian international and Brighton midfielder Radostin Kishishev bade on Sunday farewell to his young and beautiful wife, who died of cancer a day earlier. She was 38.

Krasimira Kishisheva died early on Saturday at a Sofia hospital after falling into a coma at the beginning of the week.

The young woman was diagnosed with cervical cancer about two years ago during her husband's stint in England's Brighton.

Kishisheva underwent successfully the chemotherapy treatment, but her ??condition deteriorated dramatically over the last month.

She is survived by her loving husband and their two sons - Prodan and Dimitar.

Kishishev, 38, is a three-time champion of Bulgaria as part of Litex football club. In England he also played for Charlton Athletic, Leeds and Leicester City.

As part of Brighton club, he staged an impressive performance in the first half of the season before returning to Bulgaria to deal with a family illness and had already hinted at retirement.

The Bulgarian midfielder left the League One championship winning squad in May last year.