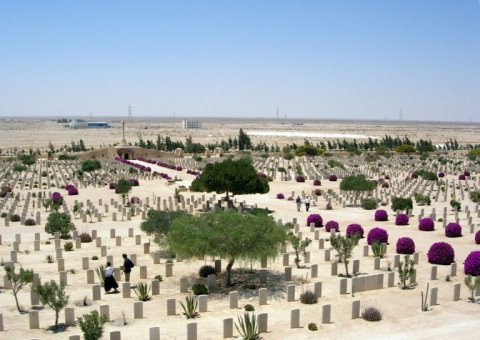 View of a war cemetery in El-Alamein, Egypt. Photo from cwgc.org

World War II veterans and delegates from former foes have come together in the Egyptian town of El-Alamein to mark 70 years since the battle that sealed the Allied victory in North Africa.

With so few surviving World War II veterans, the ceremony could be the last of its kind, international media have pointed out.

The international commemoration, organized by Britain, was held in the Commonwealth cemetery in the Mediterranean town, where more than 7 000 soldiers from the member countries have been buried, as well as around 100 soldiers of other nationalities.

Dignitaries included New Zealand's defence minister, Jonathan Coleman, and Gianfranco Fini, president of the Italian chamber of deputies. Other countries were represented by their ministers for veterans' affairs.

Separate national ceremonies were also held on the site of the battle, notably at the Italian cemetery where some 5,200 soldiers are buried and the German cemetery, the final resting place for 4,200 German soldiers.

The defeat of the German and Italian forces put an end to Hitler and Mussolini's ambitions to take over the port of Alexandria on the Mediterranean and the Suez Canal.

The battle was a turning point in World War II, halting the advance of the Axis in North Africa before the final victory a year later.