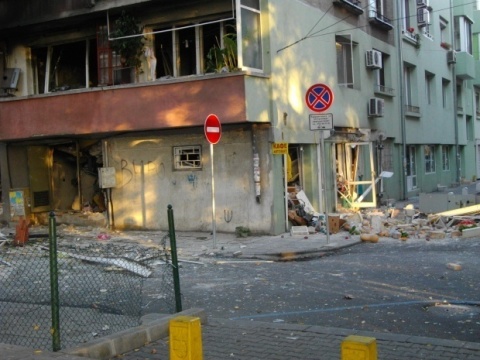 An electrical substation exploded early on October 16 in Bulgaria's Black Sea city of Burgas, damaging several apartments in a residential building, but leading to no casualties. Photo by BGNES

High temperature and pressure are the latest lead in the power substation blast in Bulgaria's Black Sea city of Burgas.

Experts have opened Saturday morning the transformer and established that it contained only 25 liters of oil, from the required 300, Darik radio and the Bulgarian National Television, BNT, reported.

It remains unclear if the explosion was caused by the overheating of the oil or by its possible mysterious draining before it. Authorities are probing other leads as well.

Experts further explain they have established a swelling of the transformer's casing, meaning there was high temperature and high pressure, which caused the oil leak and evaporation, triggering the blast.

On Friday, Burgas Mayor, Dimitar Nikolov, announced material damages amounted to BGN 140 000, which does not include the damage at the apartment building where the substation was housed. He said he would demand from the Austrian-owned Power Utility EVN to pay for all losses.

EVN employees replaced a safety fuse in a Burgas electrical substation around 1:11 am on October 16, as EVN had received a call from local residents that smoke was coming out of it.

Ten people (three families) had to be accommodated in a Burgas hotel, but were moved Saturday to municipal housing. Another municipal apartment has been allocated to an elderly woman from the damaged building, where repairs have already begun.

Right after the blast, EVN Bulgaria reported there were no traces of explosion in the transformer and promised to conduct two independent expert probes to find out the cause of the incident.

EVN has also promised to compensate the citizens whose apartments were severely damaged in the explosion.