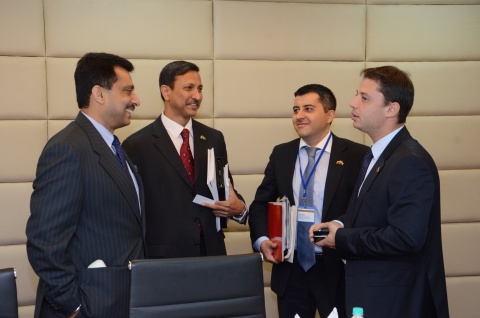 Bulgarian Energy and Economy Minster Delyan Dobrev was on visit to New Delhi on the occasion of the 17th session of the Bulgarian-Indian Intergovernmental Joint Committee on Scientific and Technical Cooperation. Photo by BGNES

Bulgaria's participation in India Engineering Sourcing Show 2013 was agreed during the meeting of Bulgarian Economy and Energy Minister Delyan Dobrev with India's Minister of State for Commerce and Industries, Jyotiraditya Scindia in New Delhi, according to a media statement of Bulgaria's Ministry of Economy, Energy and Tourism (MIET).

During the forum, Bulgaria's Economy and Energy Minister invited Indian companies to participate in the summer and autumn Plovdiv Fairs.

At the next session of the Bulgarian-Indian Intergovernmental Joint Committee on Scientific and Technical Cooperation scheduled to take place in Sofia, Minister Scindia is expected to be accompanied by a business delegation, according to MIET's press office.

India's Minister of State for Commerce and Industries said she was impressed with the excellent conditions Bulgaria offered to foreign investors, including the favorable taxation policy and the investment incentives.

He pointed out that Bulgaria was a bridge for Asian investors to the entire EU market, adding that this was great potential for Indian companies.

In the course of the meeting, a Memorandum of Understanding was signed between the Executive Agency for Promotion of Small and Medium-Sized Enterprises and India's National Small Industries Corporation, as well as a Protocol of the 17th session of the Bulgarian-Indian Intergovernmental Joint Committee on Scientific and Technical Cooperation.

The MoU aims to stimulate business contacts between small and medium-sized enterprises of the two countries, as well as the implementation of joint Bulgarian-Indian projects.