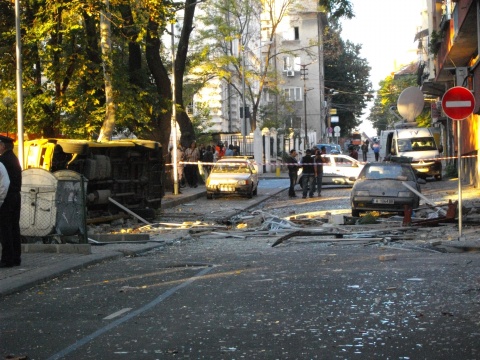 An electrical substation exploded early on Tuesday in Bulgaria's Black Sea city of Burgas, damaging several apartments in a residential building, but leading to no casualties. Photo by BGNES

The placement of electrical substations in residential buildings should be abolished, according to Dimitar Nikolov, Mayor of the Bulgarian city of Burgas.

Nikolov's statement followed Tuesday's accident in which an electrical substation exploded in Burgas, destroying two apartments and causing major damage to the building it was placed in.

Fortunately, the accident did not result in any casualties.

The Burgas Mayor has already discussed legislation amendments with Regional Development Minister Lilyana Pavlova and the head of the Parliament's committee on regional policies.

The existing electrical substations in buildings will be relocated to a safe distance, the amendments also envision.

All repair costs will be paid by the EVN power distribution company, Nikolov said.

"If they refuse (to pay), the municipality will cover them."

EVN employees replaced a safety fuse in a Burgas electrical substation around 1:11 am, as EVN had received a call from local residents that smoke was coming out of it.

The substation exploded soon after the employees left. The blast slightly injured two children and their father. Many residents of the affected building had already left it, presumably saving their lives, according to local media.

Several nearby shops have been completely destroyed.