Bulgaria Coach to Call Up Berbatov Once Again - Report 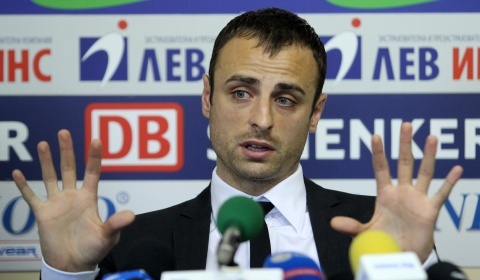 In September, Berbatov refused the call of the Bulgarian national football team head coach Lyuboslav Penev to come back to defend the national colors. Photo by BGNES

Bulgaria coach Lyuboslav Penev will once again try to persuade Dimitar Bebratov to return to his home country's team, according to a local media report.

Penev sent a call-up to Berbatov to play for Bulgaria in the World Cup qualifiers against Italy and Armenia in September, but the striker declined.

However, the Bulgarian coach now believes Berbatov may have changed his mind now that he has calmed down after leaving Manchester United and settling at Fulham, according to the report.

Berbatov may receive a call-up for Bulgaria's upcoming friendly against Ukraine in November.

Dimitar Berbatov announced at the beginning of May 2010 his retirement from international football with immediate effect. He was captain of his country and scored a national record 48 goals in 74 matches.