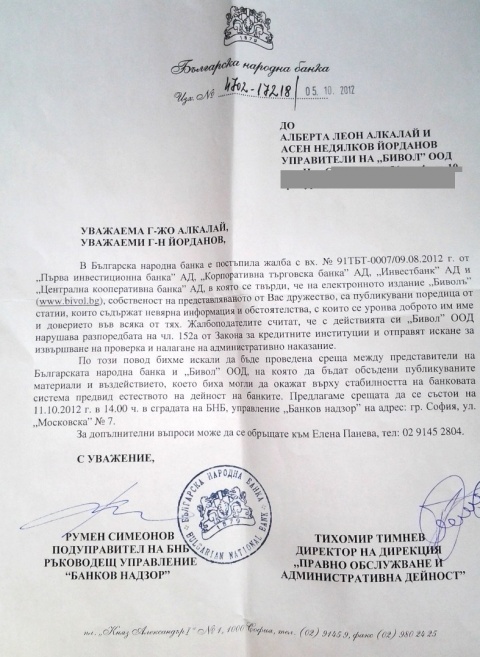 Copy of the letter sent to Bivol journalists by the Bulgarian Central Bank.

Four banks, described as "bad apples" in a 2006 cable, sent to Washington by former US Ambassador in Sofia, John Beyrle, have filed a claim against the site for investigative journalism Bivol.bg.

All four have sent a claim to the Central Bank, (Bulgarian National Bank, BNB) insisting it imposes a fine on the investigative journalists.

BNB have proposed the date of October 11, 2012, for the parties to meet and discuss the published materials and their possible effect on the stability of the country's banking system. Bivol say they received the letter, dated October 5, too late (October 11) in order to be able to attend.

"We, too, have questions for BNB – what affects more the stability of the bank system? Is it the probability that we have banks which deal with laundering money from local and foreign criminals and connected lending, as Beyrle wrote, or the fact it is being made public?" Bivol write.

The journalists remind that the hushing of the said cable has violated to the highest extend public interest and has been reported as the top "taboo" topic in Bulgarian media for 2011.

The "taboo" emerged after a panel from the Institute for Moderns Politics and the Friedrich Naumann Foundation made a content analysis of 10 Bulgarian newspapers.

"Is society benefiting from such taboos? Is the sanctioning of inconvenient publications contributing to freedom of speech in a country at the bottom of freedom of speech rankings by international organizations? These are the topics we would propose for discussion to BNB," Bivol conclude.

Below is the translation of the BNB letter in English:

The Bulgarian National Bank has received a complaint filed under number 91TBT-0007/09.08.2012 from First Investment Bank JSC, Corporate Commercial Bank JSC, Investbank JSC, and Central Cooperative Bank JSC, which insists that the internet site Bivol (www.bivol.bg), owned by the company you represent, has published a series of articles, containing false information and circumstances, which undermined the reputation and credibility of each one of these banks. The claimants believe that with their actions Bivol Ltd violate article 152A from the Credit Institutions Act and call for a probe and administrative sanctions.

Because of the above, we wish to have a meeting between representatives of Bivol Ltd and BNB to discuss the published materials and their possible effect on the stability of the country's banking system when taking into account the nature of banks' activities. We propose to hold the meeting on October 11, 2012, at 2 pm in the BNB building, Bank Supervision Unit, at the following address: Sofia, 7 "Moskovska" street.

If the violator under paragraphs is a legal entity, a property sanction is imposed , ranging from BGN 10 000 all the way up to BGN 150 000.