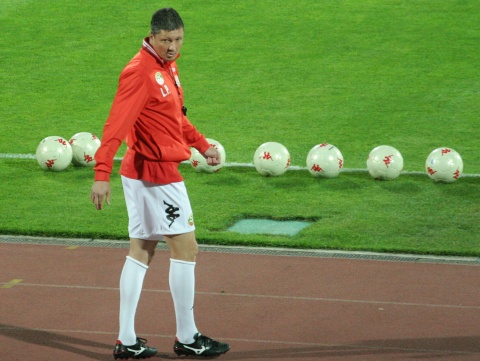 "We respect all opponents from our group but we are ready and have the power to beat each one of them. However, that will only happen if we are committed 100% starting off with the match against Denmark," Penev told reporters in Sofia Wednesday night, as cited by BGNES.

Bulgaria is in a tough qualifying group for Brazil 2014, together with Italy, Denmark, the Czech Republic, Armenia, and Malta.

At the start of the qualifying matches in September 2012, Bulgaria drew Italy 2:2 at home, and then beat Armenia 1:0, also in Sofia.

Thus, Bulgaria scored its first victory since beating Wales in Cardiff in 2010, and the first win at home since beating Georgia in Sofia in 2009.

It is now about to face Denmark on Friday, and the Czech Republic next week.

"We already have established a playing style of our own. All I am asking from the boys now is to improve their performance, and to fulfill the tasks assigned to them. I am not asking for something that they technically cannot do," explained Penev, who is the nephew of legendary coach Dimitar Penev who led Bulgaria to bronze medals in the 1994 World Cup in the USA.

"The Danes are a strong opponent. There are no weak teams in our group, Malta included. I have high expectations. I expect the boys will be devoted as they were against Italy and Armenia," Penev added.

He said he called up 27 players for the match knowing that some of the key Bulgaria players have suffered injuries and might not be 100% ready for the match against Denmark in Sofia.

The Danish national football team arrived in the Bulgarian capital earlier on Wednesday.