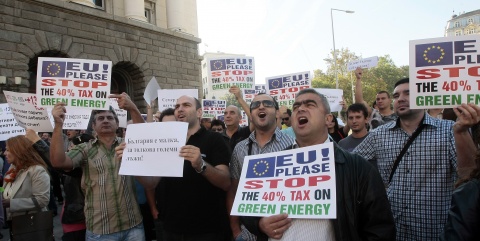 Renewable energy producers and industry representatives staged Monday their third protest over the grid access fee in front of the headquarters of the State Commission for Energy and Water Regulation (DKEVR) in Sofia.

The protesters yet again demanded the resignation of DKEVR Chair Angel Semerdzhiev from the parliamentary committee tasked with supervising the watchdog's activity.

Renewable energy producers have insisted the fee for accessing the networks of the three power distributors operating in the country will deprive them of 10-40% of their revenues and will lead to numerous bankruptcies.

Nikola Nikolov from the Bulgarian Photovoltaic Association made clear Monday that the complaints against the DKEVR decision to introduce the grid access fee had already been submitted with the Supreme Administrative Court (VAS).

He added that the complaints would also be filed to the EC Representation in Bulgaria by the end of the week.

A number of renewable electricity producers have threatened they will not sign the contract supplements with the power distributors concerning the grid access fee.

The DKEVR Chair commented that the move was illegal, saying that the renewable electricity producers had to be disconnected from the grid.

The protesters responded by saying that the Chair of the energy watchdog had no such powers.

After failing to arrange a meeting with Angel Semerdzhiev, the protesters headed for the building of the Council of Ministers.