Ukraine Says 'Thanks!' to Steve Jobs with Monument in Odessa 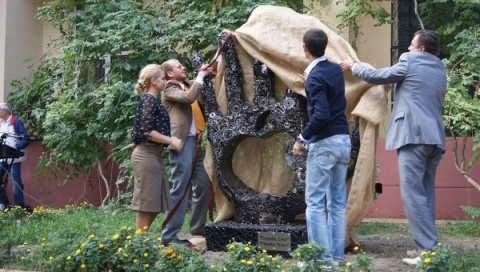 The Ukrainian monument of Steve Jobs is shaped like an open palm, and is called "Thanks, Steve!" Photo by Odessa Municipality

The Ukrainian Black Sea city of Odessa has become the latest to honor Steve Jobs, unveiling on Friday what appeared to be the world's second public monument to the late Apple Inc. co-founder.

The 200-kg, two-meter-high metal monument is shaped like an open palm, with Apple's logo, an apple with a bite mark, cut through it, the Odessa administration reported on their website, as cited by RIA Novosti.

The sculpture, entitled "Thanks, Steve!", was welded from bits of scrap metal, including, but not limited to, screws, nuts, bearings and even an ax, and is illuminated at night by white-and-blue lights.

The artwork, created by local artist Kirill Maximenko, was installed in front of a college on Novoselskaya Street on Friday, which marks the first anniversary of Jobs' passing from cancer at the age of 56.

The world's first public monument to Jobs was presented in Budapest last December.

The Russian cities of St. Petersburg and Novosibirsk announced plans to honor Jobs with statues, though no such reports have come out so far from Jobs's native USA.