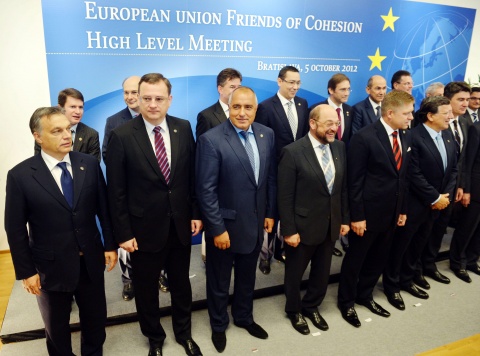 Bulgarian PM Borisov (3rd on the left) during the Prime Ministers’ meeting of 15 countries of the Friends of Cohesion group of EU taking place in the Castle of Bratislava in Bratislava, Slovakia, 05 October 2012. EPA/BGNES

Bulgaria insists on both an expansion of the EU Cohesion Policy funds, and on the keeping of a strict fiscal discipline in the EU, Bulgarian PM Boyko Borisov has told an EU "Friends of Cohesion" meeting.

Borisov participated together with 15 other EU PMs and EU officials in the Friends of Cohesion summit in Slovakia's Bratislava on Friday, the Bulgarian government press service reported.

He urged the EU to make the so called Maastricht Criteria about state finances obligatory for all member states.

"Bulgaria is an excellent [student] under these criteria thanks to the Bulgarian nation who have suffered throughout their deprivation but from here on our economic growth will be a secure basis," the Bulgarian PM stated at the forum, adding that the other participants in the Friends of Cohesion summit also agreed that the EU nations that adhered to strict fiscal policies must be rewarded.

Borisov emphasized that Bulgaria is seeking to secure an expansion of the EU Cohesion Policy as well as a greater share of cofunding from the EU for EU-funded projects.

"The debates for the upcoming Multiannual Financial Framework of the EU will be extremely hard," he added, while predicting that the EU Council and the European Parliament will approve the proposal of the European Commission for the EU budget in the next seven-year period, 2014-2020.

"If this doesn't happen, and there have to be new debates on that, this will be a very bad signal to all EU tax payers and all international markets and stock exchanges," Borisov said.

"In order to avoid this scenario, and to balance the [different] proposals, the donor states must be convinced that the funds that they will invest will be spent adequately. Because it is just unfair when certain states just demand, and get more and more, and keep spending more than they produce," the Bulgarian PM elaborated.

The press service of the Bulgarian government noted that EC President Jose Manuel Barroso confirmed Bulgaria's results in the absorption of EU funds, with Bulgaria now having absorbed 25% of the EU funds slated for it for the 2007-2013 programming period, and has signed contracts for 81% of these funds.

"That is because our government managed to create a better administrative capacity, and at the moment we don't have a single EU program with frozen funding, while the previous Cabinet absorbed under 1% [of the EU funds]," the Bulgarian PM added.