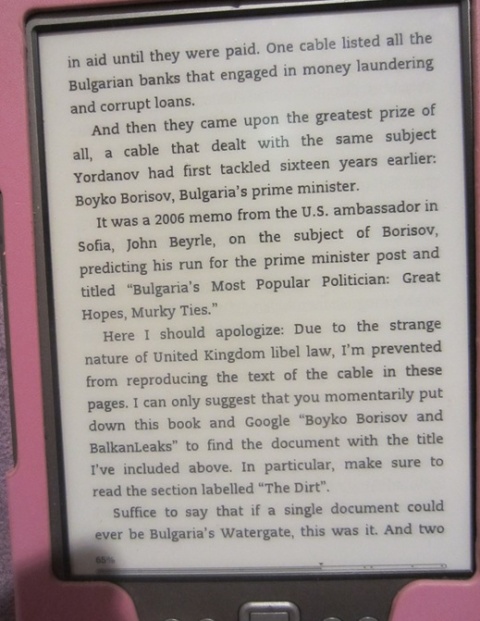 A picture of the UK-censored version regarding allegations about the criminal past of Bulgarian PM in Greenberg's book "This Machine Kills Secrets." Photo by Bivol

The UK editor of the book "This Machine Kills Secrets," written by Forbes journalist Andy Greenberg, censored a US diplomatic cable exposing the alleged criminal past of Bulgarian PM Boyko Borisov

A paragraph in the book, citing a report of former US Ambassador in Sofia, John Beyrle, destined for the State Department, about Borisov's past criminal activities, has been deleted in Greenberg's book.

The alert came from a reader, who purchased the Kindle version from the UK Amazon. He is cited by the site for investigative journalism Bivol.bg whose editors Atanas Tchobanov and Assen Yordanov have a prominent place in the said book.

The print edition, sold in the UK, has also been censured.

Both the print and the Kindle versions, sold in the US, contain the paragraph in question, in the same way it was published by Slate.com, which released several excerpts from Greenberg's This Machine Kills Secrets: How WikiLeakers, Cypherpunks, and Hacktivists Aim To Free the World's Information:

Accusations in years past have linked Borisov to oil-siphoning scandals, illegal deals involving LUKoil and major traffic in methamphetamines. ... Borisov is alleged to have used his former position as head of Bulgarian law enforcement to arrange cover for criminal deals, and his common-law wife, Tsvetelina Borislavova, manages a large Bulgarian bank that has been accused of laundering money for organized criminal groups, as well as for Borisov's own illegal transactions. Borisov is said to have close social and business ties to influential Mafia figures, including Mladen Mihalev (AKA "Madzho"), and is a former business partner of [organized crime] figure Roumen Nikolov (AKA "the Pasha").

Instead of this original text, the English edition reads as follows:

Here I should apologize: Due to the strange nature of United Kingdom libel law, I'm prevented from reproducing the text of the cable in these pages. I can only suggest that you momentarily put down this book and Google "Boyko Borisov and BalkanLeaks" to find the document with the title I've included above. In particular, make sure to read the section labeled "The Dirt."

This is far from being the first attempt to censure Wikileaks cables in the United Kingdom. When Wikileak's partner, The Guardian, published in 2010 a report by James Pardew, another former US Ambassador in Sofia, about organized crime in Bulgaria, all names of Bulgarian criminal bosses and organizations were concealed. In March 2011, it was Bivol that published the original text. Therefore, Wikileaks accused The Guardian of 'cooking' the provided information. At the time, The Guardian investigative journalist, David Leigh, explained they were obliged to conform to their lawyers' advice.

Bivol further notes that in the American edition the quote from Beyrle's cable is not complete either. The phrase "Information from SIMO tends to substantiate these allegations" has been replaced by dots. The mark for top secret documents (S/NF, i.e. SECRET/NOFORN) has also been removed.

In June 2012, the Berlin-based Tageszeitung, citing information coming from an US secret services agent, disclosed that SIMO is an abbreviation used as a codename for the CIA, which American diplomats are not allowed to mention, and SIMO stands for Special Intelligence Methods Organization.

When asked to comment, author Andy Greenberg explained he omitted the abbreviation SIMO and it wasn't the editor. "I left out the sentence about SIMO not to hide anything, but to simply keep the story clear at a very dramatic moment in the narrative. I didn't want to go on a tangent to explain the evidence that SIMO refers to the CIA," he says.

American diplomatic reports very rarely quote SIMO as a source of information. According to top American expert, Jeff Stein, the Ambassador using information collected by SIMO can be interpreted as confirmation of Borisov's criminal acts.

The entire database of 251 000 diplomatic cables contains only two politicians' names whose involvement in illegal drug trafficking has been confirmed by SIMO – Borisov and former Haiti Senate leader Joseph Lambert.