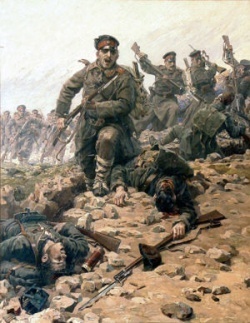 Celebrations marking the 100th anniversary of the First Balkan War will culminate on Friday with a series of events across Bulgaria.

Photographs and documents from the First Balkan War are already available online thanks to the Bulgarian State Archives Agency.

The digital collection "Military Servicemen Perished in the Balkan Wars 1912 – 1913" was launched Tuesday on the occasion of the 100th anniversary of the Wars.

The site provides information and photographs of over 48 000 Bulgarian soldiers and officers.

The new search engine http://www.archives.bg/balkanwars/ offers unique opportunity to the families of the killed servicemen to find their place of death and learn more about their and the country's history.

Meanwhile, also on Tuesday, the Speaker of the Parliament, Tsetska Tsacheva, launched an exhibit dedicated to the centenary at the National History Museum. The display is titled "March 13, 2013 – Edirne – a Curse or Illusion." It focuses on the sacrifice and hardship of the Bulgarian army.

In addition to the exhibit, the National History Museum will mark the anniversary with a display about the battle history of the 10th infantry regiment which will be located at the Haskovo Regional History Museum, and in 3 other exhibits that will travel around the country.

The Union of Reserve Officers "Atlantic" is presenting an anniversary electronic album "100th Years since the Balkan War."

The First Balkan War, which lasted from October 1912 to May 1913, pitted the Balkan League (Serbia, Greece, Montenegro and Bulgaria) against the Ottoman Empire. The combined armies of the Balkan states overcame the numerically inferior and strategically disadvantaged Ottoman armies and achieved rapid success.

As a result of the war, almost all remaining European territories of the Ottoman Empire were captured and partitioned among the allies. Ensuing events also led to the creation of an independent Albanian state.

Despite its success, Bulgaria, which was militarily the most powerful of the four states, with a large, well-trained and well-equipped army, was dissatisfied over the division of the spoils in Macedonia, which provoked the start of the Second Balkan War.