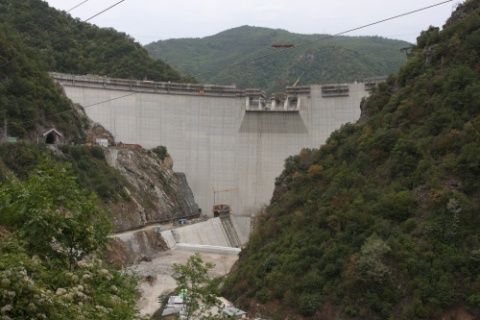 The scandal erupted in May 2010 after a visit of Prime Minister Boyko Borisov to the site of the hydroelectric power plant 'Tsankov Kamak', where he revealed that a huge hike in the initial price has been discovered. Photo by BGNES

Bulgaria's government has been forced to allot a huge sum for improving the dilapidated road next to a scandalous hydro energy project in the Rhodopi Mountains.

The construction of the 20-kilometer section, leading to 'Tsankov Kamak", has absorbed so far BGN 240 M and now another BGN 3 .5 M will be added to the sum.

This will clear the road for putting the hydro power plant into operation following a two-year delay due to vested interests and corruption.

The scandal erupted in May 2010 after a visit of Prime Minister Boyko Borisov to the site of the hydroelectric power plant 'Tsankov Kamak', where he revealed that a huge hike in the initial price has been discovered.

The leader of the ethnic Turkish party Movement for Rights and Freedoms (DPS), which was a member of the former three-way coalition cabinet, allegedly pocketed BGN 1.5 M as a consultant of four large-scale hydroelectricity projects, funded by the state - 'Tsankov Kamak', 'Dospat', 'Gorna Arda' and 'Tundzha' Dam.

The money for the hydro power plant "Tsankov Kamak", from where Dogan took the sky-high payment as an "expert," was paid by the state-owned National Electricity Distribution Company (NEK), left in tatters after the ruling of the previous cabinet.

Bulgaria's Supreme Administrative Court however acquitted Ahmed Dogan, saying there was no evidence that he had breached the public interest by receiving the fees.

Dogan holds a philosophy degree and has no qualifications in civil engineering.