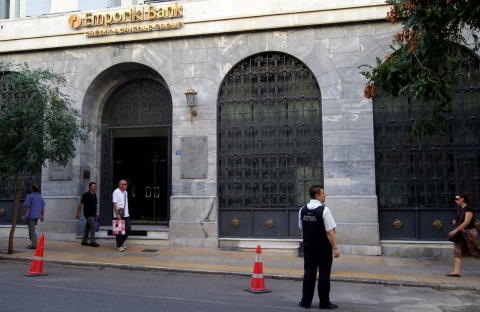 People walk past the administration building of Emporiki Bank in Athens on 1 October 2012. EPA/BGNES

Alpha Bank has announced that it has entered into exclusive negotiations with Credit Agricole S.A. to acquire the entire share capital of Emporiki Bank.

A pair of press releases on Monday issued separately by Paris-based Credit Agricole S.A. and Greece-listed Alpha Bank, respectively, confirmed that the former has entered into "exclusive negotiations" for the sale of the latter's subsidiary in Greece, Emporiki Bank.

The transaction is expected to be completed by 31 December 2012 and is subject to applicable regulatory approvals and procedures as to work councils and employment representative bodies of Credit Agricole S.A., Alpha Bank said.

Upon completion of the transaction, Alpha Bank will purchase Emporiki Bank recapitalized by EUR 2.85 B.

Prior to completion, Credit Agricole S.A. will inject a further EUR 0.5 B of capital in addition to the EUR 2.3 B capital injection completed in July 2012.

Alpha Bank will acquire Emporiki Bank's entire share capital for a nominal consideration in accordance with the terms and conditions set by the Hellenic Financial Stability Fund.

The transaction results in a net recapitalization of the combined group of Euro 3 billion and contributes towards Alpha Bank's own recapitalisation plan.

Alpha Bank will proceed expediently with the integration of Emporiki Bank and complete the restructuring of Emporiki undertaken by Credit Agricole S.A. since its acquisition in 2006.

The integration is expected to deliver substantial financial benefits, including among others, fully phased operating cost synergies of c. EUR 150 M per annum underpinned by significant economies of scale.

Alpha Bank said the transaction represented a major step in the restructuring of the Greek banking sector with the combined Emporiki and Alpha Bank having a pro forma market share of 19% of Greek deposits and 25% in lending, including leading market shares in mortgages and corporate lending. Pro forma consolidated assets as of 31 March 2012 stood at EUR 78 B.