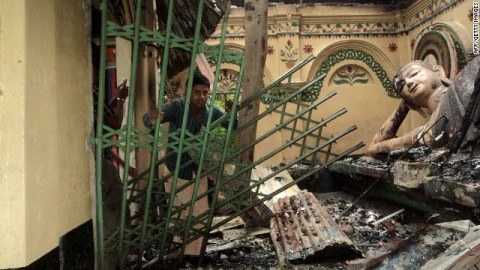 Rioters torched Buddhist temples and homes in Bangladesh over a Facebook photo deemed offensive to Islam. Photo by Getty Images

Crowds of angry Muslims attacked Buddhist shrines, torching some of them, over the weekend in Bangladesh to protest after a photo of a partially burned Quran was posted on Facebook, CNN reported.

The boy is tagged in the photo but did not post it himself, Jahangir said. The boy's account has been deleted and police are not naming him.

Police sent extra officers to restore calm in Cox's Bazaar, a town south of the capital Dhaka on the coast, said Jahangir.

"Now the situation is under control," he said.

The south Asian nation is about 90% Muslim, the Pew Forum on Religion & Public Life estimated in its 2011 survey of the global Muslim population.

It is less than 1% Buddhist.

Actual or reported Quran burning has led to violence in Pakistan and Afghanistan.

Relatively peaceful Bangladesh was one of many countries that saw demonstrations recently against the online video "The Innocence of Muslims," which portrays the prophet Mohammed as a womanizer and child abuser.