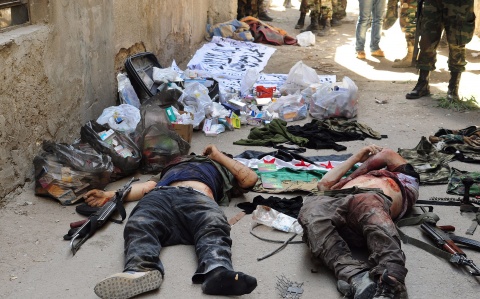 The Syrian government said on Friday its security forces fought back a "decisive attack" by the rebel Free Syrian Army on Syria's second largest city, Aleppo.

A total of 16 rebels have been killed and Syrian government forces are now fully in control of Aleppo's Sheikh Maqsoud district, the Suriya news agency said, as cited by RIA Novosti.

Syrian forces reportedly executed 25 people in public in the al-Rashideen neighborhood in Aleppo, the Local Coordinating Committees of Syria activist group said, adding that fighting in other areas continue.

The Syrian authorities have made repeated claims that these areas have been "cleansed" of "terrorists," its blanket term for rebels, but al Arabiya reports that clashes continue.

On Thursday, the UN refugee agency warned that continued violence risks pushing the number of refugees from Syria up to 700 000 by the end of the year.

Syria has been in a state of civil war for months since the attempted Arab Spring-type unrest in March 2011 against the regime of President Bashar al-Assad.