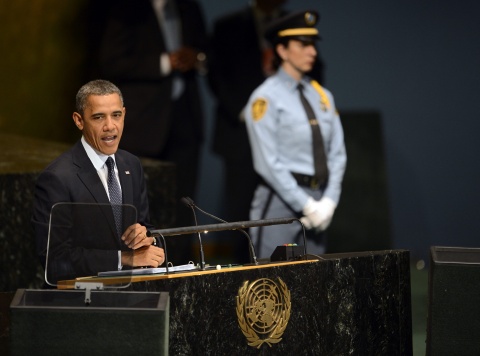 US President Barack Obama has called the low-budget movie "The Innocence of Muslims, which sparked anti-American violence in the Muslim world, "crude and disgusting" but defended the right to free speech that allowed posting it online.

"I have made it clear that the U.S. government has nothing to do with this video," Obama told the UN General Assembly Tuesday night.

But the age of the Internet - when "anyone with a cell phone" can spread offensive information, "the question is how we respond," Obama said.

"There is no speech that justifies mindless violence," he added.

The recent attacks on U.S. embassies represent an "assault on the very ideals upon which the United Nations was founded," U.S. President Barack Obama told the UN General Assembly on Tuesday, addressing the wave of anti-American sentiment that has swept through the Muslim world in recent weeks.

"If we are serious about these ideals, we must speak honestly about the deeper causes of this crisis," Obama told UN delegates. "Because we face a choice between the forces that would drive us apart, and the hopes that we hold in common."

A short web video derived from "The Innocence of Muslims" movie defaming the Prophet Mohammed sparked violent riots in several Arab and other predominantly Muslim nations earlier this month after it was posted on YouTube. In Libya, armed militants ransacked the U.S. embassy in Bhengazi in an apparently planned attack amid protests of the video, killing the U.S. ambassador to the country, J. Christopher Stevens.

"Today, we must affirm that our future will be determined by people like Chris Stevens, and not by his killers," Obama told the General Assembly. "Today, we must declare that this violence and intolerance has no place among our United Nations."

Obama opened up his speech with a tribute to Stevens, saying he "embodied the best of America" who "built bridges" across cultures.

The violence across the Arab world in the wake of the YouTube video has forced the Obama administration to confront the turbulent aftermath of the Arab Spring uprisings it supported in countries like Libya and Egypt, where anti-American protesters managed to breach the U.S. embassy in Cairo as well.