2 Separate Rallies Interrupt Each Other in Sofia 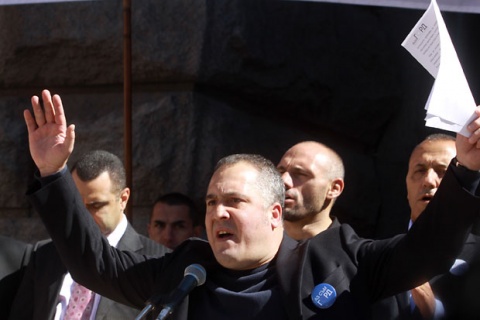 One of the rallies was organized by independent MEP Slavi Binev and his new political project, Civic Movement for Real Democracy (GORD). Photo by dariknews.bg

Several hundred Bulgarians gathered in the capital Sofia to protest against the increased prices of fuels, electricity and water on Saturday.

The rally, organized under the slogan "Bulgaria Wants", could not follow its intended route in downtown Sofia, as another set of protesters occupied the space between the Presidency and the National Assembly.

Participants of the "Bulgaria Wants" rally said they were disappointed, as they did not want to "stand alongside yet another political balloon," the BGNES news agency reports.

Binev read a list of 17 questions and requests to the government. The listed is to be handed to the Cabinet and the office of President Rosen Plevneliev on Monday.