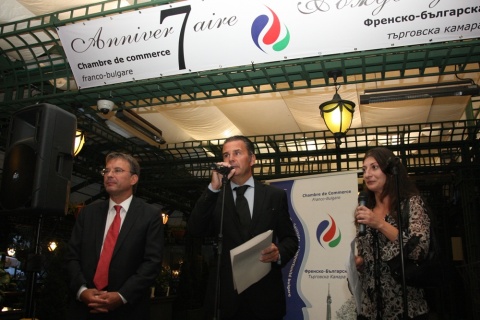 French Ambassador Philippe Autie and FBCC head Stephane Delahaye at the celebration of the seventh birthday of the French-Bulgarian Chamber of Commerce. Photo by FBCC

The celebration was attended by French Ambassador to Bulgaria H.E. Philippe Autie together with a number of Bulgarian and French businesspeople and officials.

Stephane Delahaye, Chairman of the French-Bulgarian Chamber of Commerce, welcomed everybody, while expressing his content with the development of French business in Bulgaria.

Over 20 new members have joined the FBCC since the start of 2012, including Ernst and Young, Coface, Gunyfal, Egis (a company dealing with water supply infrastructure projects), as well as the Accor hotels through their brand Novotel, the Chamber noted, adding that the formal transfer of Emporiki Bank to the French group Credit Agricole is another important development for French business.

In his remarks, Delahaye has emphasized the FBCC's growing cooperation with the Bulgarian government and the local authorities, with the Chamber set to participate together with the InvestBulgaria Agency in a business forum during the International Fair for Agricultural Products in Paris on October 22, 2012.

French Ambassador to Bulgaria Philippe Autie has stressed the fact that the French authorities are paying enormous attention to the restoration of France's balanced trade, therefore strengthening the French economic presence abroad as well as its economic diplomacy.

He praised the large number of new French investments in Bulgaria since the start of 2012.

The large number of greeting letters that the French-Bulgarian Chamber of Commerce received from Bulgarian institutions such as the Presidency, various ministries, and the Sofia Municipalities has been interpreted as evidence of the authority the institution has managed to gain in the recent years.

"The fact that the French-Bulgarian Chamber of Commerce already brings together over 140 major companies known for their high standards and proven successes is impressive. The active cooperation underscores the importance of economy and trade in the relations between our nations. I believe that the established contacts and friendships, which we owe to the Chamber's activities, will contribute to the additional growth of trade and investments," Bulgarian President Rosen Plevneliev declared in his letter to the FBCC.

The French-Bulgarian Chamber of Commerce was set up in 2004; it is a member of the Union of French Commercial and Industrial Chambers abroad. It consists of 150 members, including the largest French and francophone companies in Bulgaria as well as Bulgarian companies working in France, and accounts for over 20 000 employees in Bulgaria.