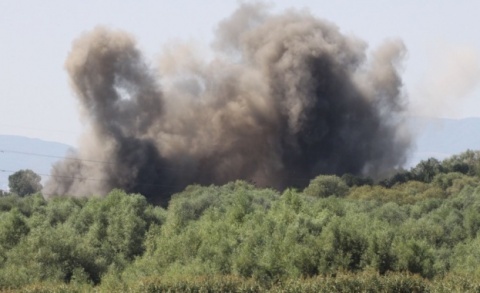 A photo by BGNES shows the explosion at a privately-owned ammunition depot near the Petolachkata road junction close to Sliven in Southeastern Bulgaria that occurred on June 5.

The mass clean-up effort at a blasted ammo depot in southeastern Bulgaria has been finally conluded.

The clean-up was launched several days after the explosion, which took place on June 5.

The clean-up operation was carried out in an area exceeding 7 400 acres, the Bulgarian National Radio has informed.

On June 5, a series of explosions occurred at a private-owned ammo site near the Petolachkata road junction close to Sliven.

Three of the ammunition depot's employees were killed in the accident.

The depot is owned by the Bereta Trading company.